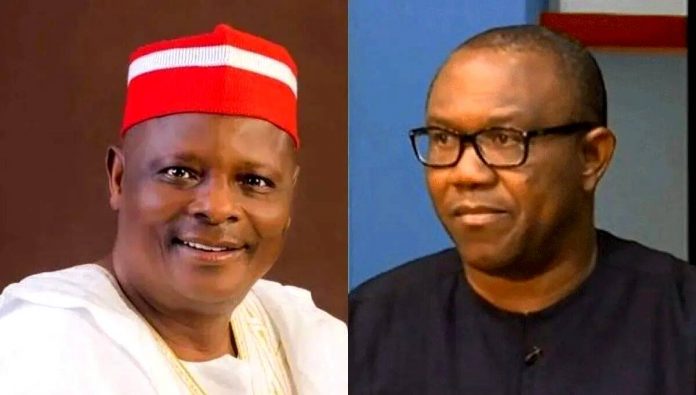 They spoke at a town hall series with presidential candidates in Abuja organised the Arise Television/Centre for Democracy and Development, CDD in partnership with  Vanguard Newspapers,  Premium Times, Nigerian Guild of Editors, NGE and Nigerian Union of Journalists, NUJ.

Yesterday’s meeting was on security and economy.

Before the series began supporters of Atiku-Okowa and those of the LP and the Presidential Candidate of the All Progressives Congress, APC, Asiwaju Bola Ahmed Tinubu locked in a hot exchange over representation.  Obi’s supporters protested against Okowa standing in as representative of Atiku while Atiku’s supporters insisted that the Presidency is one.

Supporters of Atiku Abubakar led by Senator Dino Melaye, were engaged in a hot exchange of words at the commencement of the Town hall meeting held at the Transcorps Hilton, Abuja.

The exchange delayed the commencement to the event slated to begin at 7:30 pm for close one hour.

Trouble began when the crowd heard that the PDP Vice Presidential Candidate, Ifeanyi Okowa, would be standing in for his principal.

A section of the crowd insisted that only Presidential candidates should be allowed.

However, Dino and the Atiku team insisted that the “ticket is one”

When calm was restored, Obi, Kwankwaso, Abiola and Okowa were allowed to speak to the audience for three minutes each on their credentials and experience before they were asked to speak on insecurity.

The Anchor, Dr Reuben Abati asked them what they would have done as president on the Kaduna-Abuja train attack.

Peter Obi said the Kaduna Train attack incident would have been handled better if the intelligence gathered was properly processed. He said with him as Commander -in-Chief, things would be done differently.

Kwankwaso said as a former Minister of Defence, I knew things that could have been done better. “When I take over we will increase the number of our military to one million men. We will take every inch of our territory. We will also increase the police force and civil Defence to one million men to tackle our security situation.“

On his part, Abiola expressed sadness that the incident ought to have been prevented. He said he would empower the security forces to do their jobs because there was no need “to reinvent the wheel.”

The Presidential running mate of the PDP, Ifeanyi Okowa,  said as a sitting Governor, he knows that the intelligence community needed better coordination because that is currently not happening. He said with Atiku as President this will change for the better.

On the banditry in the North-West, Kwankwaso said

I’m angry like most Nigerians. I have been in government at the state and federal levels for over 30 years. It is because both the PDP and the APC have failed to do what they are supposed to do that we left to join the NNPP.

On his part, Peter Obi said you cannot separate the economy from security. If you don’t take people out of poverty you manufacture insecurity. A country where those in government are richer that entrepreneurs has a problem. I was  Governor of a state for eight years. I never borrowed from any financial institution in Nigeria , when I left office, we never owed any contractor who delivered on his project , we never owed pensions we left money in the state accounts in Access Bank and Fidelity Bank.”