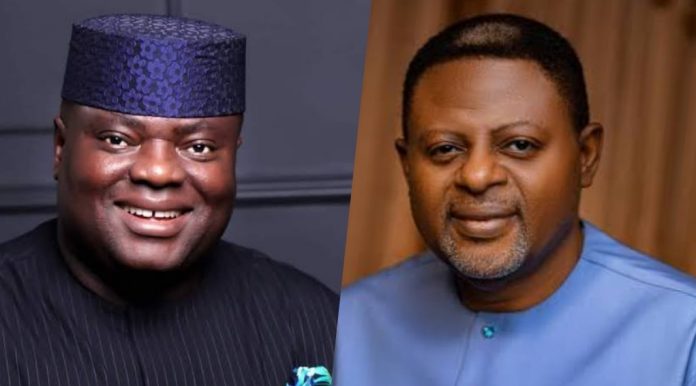 Sam Bassey, a chieftain of the All Progressives Congress (APC) in Cross River, and community leaders in the Biase Local Government Area have pledged support for the governorship candidate of the Peoples Democratic Party (PDP), Sandy Onor.

They made the declaration at a stakeholders’ meeting on Sunday in Biase, near Calabar.

Mr Bassey said he and his followers decided to work for the success of Mr Onor while still in the APC.

He noted that their action does not result in any way amount to anti-party activity but corrects the injustice meted out to their constituency.

“The zoning structure adopted by the state chapter of the APC in their primary election is in itself anti-Akamkpa/Biase federal constituency where we all hail from,” he stated.

Mr Bassey pointed out that using zoning or rotation to deny or marginalise other minority segments of the state is against the spirit of brotherhood.

Lashing proponents of back-to-south zoning arrangement, Mr Bassey maintained that the agitators of rotation are mostly those who want to dominate the other sections that make up a zone continually

He stressed that every senatorial zone has credible people and resources to lead the state.

He regretted that the APC governorship and senatorial candidates are from Efik and one local government area.

While noting that this arrangement was with the exclusion of Akamkpa and Biase local government areas, he said it was an attempt to marginalise the minorities in the south perpetually.

“I am vehemently opposed to this kind of arrangement where some people will remain underdogs and cannot occupy certain positions.

“Against this background, I, some community leaders and hundreds of our followers in the Akamkpa/Biase federal constituency have endorsed and adopted the PDP governorship candidate, Prof. Sandy Onor, ahead of 2023 polls.

“I believe that Sen. Onor can help us, we have discussed. He is very approachable and has a listening ear. We would try our best to mobilise for the election,” he stated.

On whether his support and campaign for the PDP candidate does not amount to anti-party activity, he said, “I am still in the APC and a legacy member of the party.

“I have not defected, but the truth is that I am supporting the PDP because that is where the happiness of my people comes from. Besides, if my people are not happy with politics, I cannot even call myself a politician.”

He advised all the candidates and parties to play by the rules rather than engage in politics of propaganda and sentiments.

Also speaking on behalf of some community leaders, Emmanuel Ogban said, “Some of us have already made up our minds and are mobilising our people to work for the PDP governorship candidate to fight marginalisation in the south. We have been neglected.

“This 2023 election is not about party affairs, it is about capacity and credibility as well as who can deliver and redeem us from sufferings and economic doldrums,” he said.