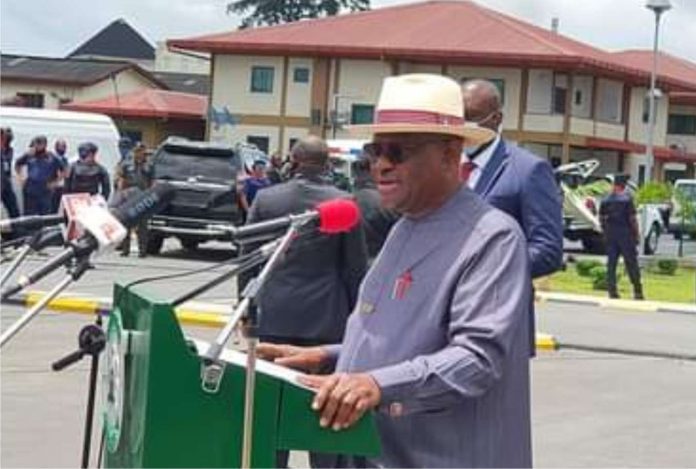 Rivers State Governor Nyesom Wike has said the agreement reached by the Nigeria Governors’ Forum (NGF) with the Judiciary Staff Union of Nigeria (JUSUN) is not binding on the Rivers government.

The governor said it was unfortunate that the NGF signed an agreement with the striking members of JUSUN, on behalf of state governments without consulting Rivers on the contending issues.

Speaking at the inauguration of the Senate Building of the Rivers State University and the groundbreaking for the construction of the Faculty of College of Medical Sciences on Saturday, Wike insisted that the NGF was on its own.

He said: “Rivers State Government has implemented financial autonomy for the legislature and Judiciary. The judiciary has collected the first and second quarters of their capital fund. We still use our money to do infrastructure for them in spite of the fact that we gave them their capital expenditure.”

The governor, who said the state government had commenced implementation of no work, no pay, against the striking workers, reiterated that he would never sign any agreement with the JUSUN because both judicial and legislative arms of government in the state were enjoying full autonomy.

“Governors’ Forum is not a Government. It is an association of Governors to share ideas and not to sign agreements on behalf on State governments.

“Even when they say something, I will have to come back to the state and call State Executive Council meeting, and we will take it as our resolution that this is what we are going to do. So, whatever they have signed with JUSUN, let me tell you people, it is not binding on Rivers State government,” he said.

The governor noted that the Rivers State University secured the support of the state government because of the harmonious relationship between the university management and the governing council.

He said that despite the ethnic coloration given to the appointment of the Vice-Chancellor and Pro-Chancellor, they had justified their positions following their achievements in turning around the fortunes of the institution.

Wike said the infrastructure of the institution had been upgraded through the establishment of four additional campuses to avail Rivers people more access to tertiary education.

He said the remuneration and other conditions of teaching and non-teaching staff had also been enhanced.

Speaking at the commissioning of the construction faculty buildings for Basic Clinical Sciences, Clinical Science and Pathology of the university, Wike gave full scholarship to all the 55 students already admitted into the college of Medical Sciences of the institution.

He said the scholarship would last the entire period of the programme.

He also directed the management of the institution to refund all fees paid already by the students, and forward their details to his office for computation.

Wike mandated the university to commence construction work on the building to house the School of Nursing within the premises of the Faculty of Medical Sciences.

The governor recalled that the previous administration once received in a month N100bn from the federation account, but frittered it away on elephant projects like the abandoned Monorail and non-existing Justice Karibi Whyte hospital.

He said the state allocation under his administration had never exceeded N13bn per month adding that despite the shortfall, he had within his second term awarded contracts for 10 flyovers in Port Harcourt and Obio-Akpor local government areas

Senator George Sekibo, who inaugurated the Senate building, commended Wike for his giant developmental stride in the state.

He explained that the governor had continued to take the lead in project implementation and would leave an indelible mark on the governance of the state.

Nigeria Medical Association President, Prof. Innocent Ujah, who laid the foundation for the Faculty of Basic Clinical, Clinical Science and Pathology buildings, observed that under Wike’s administration the health sector had received unprecedented attention geared toward the sustainable development goals.