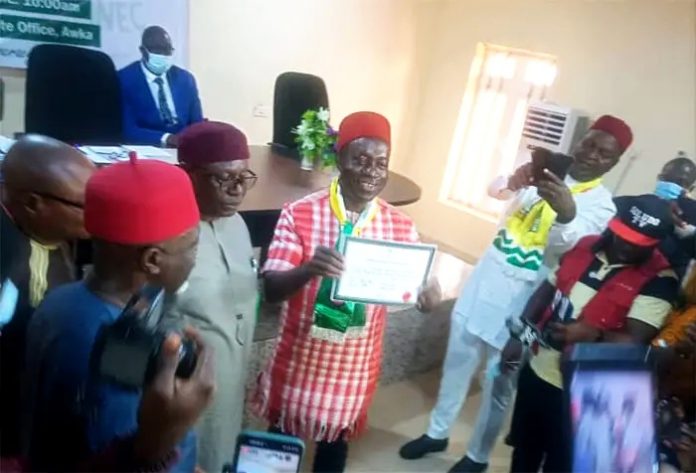 Anambra State governor-elect, Professor Chukwuma Soludo, has described the woman who rejected the bribe of N5000 to influence her voting during the just concluded governorship election as exhibiting the true spirit of a typical Anambra person.

Recall that the woman from Ukwulu in Dunukofia local government area rejected the offer, insisting that although she did not have N5000, she would never accept any gratification that would make her vote against her conscience.

Governor Willie Obiano had already gifted the woman with N1 million in appreciation of her action. Speaking on Friday after receiving his certificate of return at the state headquarters of the Independent National Electoral Commission, Awka, Soludo said the woman had made Anambra State proud.Soludo said: “At this moment, I summarize the action of the woman of Ukwulu who rejected N5000 to influence her voting as a metaphor that represents the spirit of Anambra. The woman said I am poor; I don’t have any money in my pocket, but I won’t take N5000. That is the spirit of Anambra and her action is the resilience of the Anambra spirit”.

Speaking on his victory in the election, the governor-elect further said: “This is the moment and the hour has come. God knew that at this hour, my deputy and I will have these certificates in our hands.“We thank God for making this day. This is Anambra, the Light of the Nation. This is the state that helped to bring democracy to Nigeria.

“This is the state of Dr Nnamdi Azikiwe, Dr Nwafor Orizu, Sir Loius Ojukwu, Professor Chinua Achebe, Chimamanda Adichie and many others”. “We can never take for granted the determination of the various institutions that saw us to this day, starting from the presidency, the president himself and the security agencies for insisting on a level -playing field and we want to say that the era when some people would sit somewhere and write results is over.“In the build up to the election, there were tense moments because we were told repeatedly that some people said they had decided to conquer and take Anambra, In Anambra we don’t take, we make the people to vote. And I am glad that the federal agencies, from the presidency and the national institutions, insisted on ensuring free and fair election.

“I have to single out two institutions namely, the judiciary and INEC because as part of this process, the Federal High Court and the Court of Appeal and the Supreme Court led by the Chief Justice of Nigeria, CJN, stood out to ensure the integrity of the judiciary. Without that, we won’t be here today. It’s a long story.

“I want to commend INEC which was consistently assuring us of its determination to conduct this election. Even when people said it was impossible to conduct the election, the Commission believed that it was possible, having set its agenda in terms of execution”.

National Commissioner of INEC in charge of publicity and voter education, Chief Festus Okoye, who performed the ceremony said the presentation of the certificates was a constitutional requirement.

He said: “The handover ceremony is in compliance with section 75 of the Electoral Act, 2010 (as amended), which mandates the Commission to issue a Certificate of Return to the Governor and Deputy Governor-elect of Anambra State signifying the fact that they won the just concluded 2021 Anambra State governorship election and satisfied the constitutional and legal requirements in section 179 of the Constitution of the Federal Republic of Nigeria, 1999(as amended).

“As you know, the tenure of the incumbent Governor of Anambra State will expire on 17th March 2022. The implication is that the governor and deputy governor-elect will not assume office immediately. They must wait for the incumbent governor and his deputy to complete their four-year tenure before they can be sworn in.

“There is no doubt that the Commission conducted the 6th and 9th November 2021 governorship election in difficult circumstances. Indeed, the election was conducted in a challenging environment accentuated by fear, anxiety and uncertainty occasioned by political agitation in the southeast geopolitical zone.

“As we all know, agitations of this kind occur often in multi-ethnic and multi-cultural political settings where identities are politically mobilized in the struggle for power and resources and sometimes in the desire for a just and equitable society.

“The significant point to note, however, is that the Commission has remained firm and resolute in proceeding with the election based on its understanding of section 178 of the Constitution which circumscribed the conduct of elections within a firm and immovable constitutional compass.

“The consequences of aborting the election would have been a serious constitutional crisis and political uncertainty that could have further threatened Nigeria’s stability and survival.

“Against this backdrop, the fact that we are here today making this presentation after an election that has been widely acclaimed as meeting regional standards of free and fair election is a clear affirmation that Nigerians and the citizens of Anambra State in particular believe in democracy, not only as a means of addressing the numerous development challenges, but also a framework for the resolution of the multifarious dimensions of the National Question”.

According to him, “the Commission will audit the conduct of this election as it is the tradition after every major election in order to reflect on things that worked well and those that failed to work as desired; and use the lessons learned in the preparation for the next set of elections”, adding that “the benefits offered by the electoral cycle approach adopted by the Commission that we now believe that the present trends of conducting elections imbued with integrity has become irreversible”.

He said that “with specific reference to genuine concerns expressed by citizens on the performance of the Bimodal Voter Accreditation System (BVAS) in the February 6, 2021 Anambra governorship election, the Commission wishes to state categorically that it stands to benefit from such criticisms and promises that these challenges will be addressed as was evident in the improved functionality of the BVAS in the supplementary election in Ihiala Local Government Area”.

He added: “We are confident in our judgment that the Bimodal Voter Accreditation System will remain a fundamental feature of our accreditation process as it will consign into the dustbin of history worrisome incidents of multiple voting and identity theft that in the past denied the country’s electoral process the desired public trust and confidence. On this note, the Commission will continue to improve on and perfect the technology for subsequent and future elections.

“We commend the doggedness, resilience and courage of our permanent and ad-hoc staff that defied all the odds and grave dangers to personal life and safety to traverse the entire terrain of Anambra State to conduct this election.

“We thank the security agencies that remained firm and professional in supporting the Commission throughout the election period and beyond”.