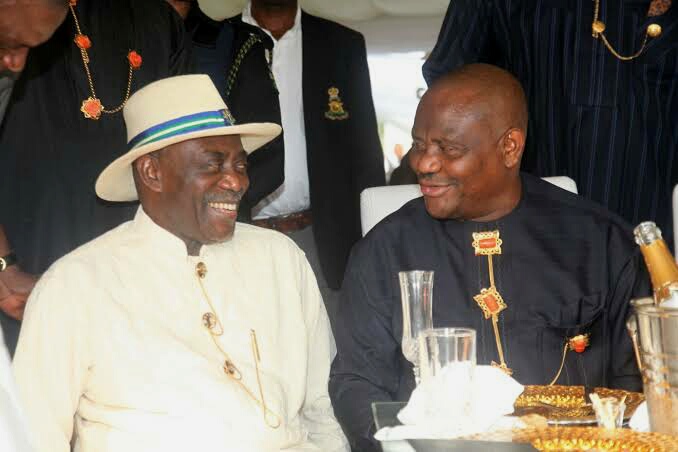 Rivers State Governor, Nyesom Wike, has gifted a mansion to former governor of the state, Dr. Peter Odili, on the latter’s 74th birthday.

Media aide to the Governor, Mr. Kelvin Ebiri, in a statement, said the residence was built and donated to Odili by the Rivers state Government.

According to Ebiri, Wike spoke on Monday during the 74th birthday reception organised to honour the former governor of Rivers State, Dr. Peter Odili, at the private residence built and donated to him by the State government in Old Government Residential Area, Port Harcourt.

Wike is a political godson to Dr. Odili, who was the state Governor from 1999 to 2007 and is commonly referred to as the golden governor of Nigeria.

Governor Wike was the executive chairman of Obio/Akpor local government Area of the state when Odili held sway as Governor.

Wike had in several fore eulogized Odili and his wife, Justice Mary Odili (retd) for their role in his political career and success in life.

While further eulogizing the sterling qualities of the ex-governor, Wike said he had been well schooled by Odili in politics, saying his present political ordeals were not surprising.

Although the cost of the multi-million naira was not disclosed, Wike said Odili gave him and others everything and prepared them for the future.

He recalled that when Dr. Peter Odili was to run for the office of the president, he had a large crowd following, happily.

But noted that when the issue of governorship of Rivers State was to be decided, and he did not give those who wanted it, they all left him, ran to Abuja to thwart his presidential ambition.

Governor Wike, however, said he has been holding on to the advice of Dr. Odili. Hence, he was not surprised at the turn of events and the outcome of the PDP presidential primary.

He described Dr. Peter Odili as a true leader of men who groomed many, and supported a lot of persons to political lamplight, particularly in Rivers State and across the country.

The statement by the governor’s spokesman partly read, “There was a time every political class abandoned Dr. Odili. This is a man who gave us everything. Some people called him Mr. Donatus.

“There was no abuse he did not get. Everybody he tried to help their families, at the end of the day, all betrayed him.

“For us, we have used him as a school and we thank him for making himself available for us to use him to learn so that we won’t be shocked of whatever that is going to happened.”

The Governor expressed delight for the opportunity to have known Dr. Odili and be able to celebrate him, pointing to the several support and gains from the political tutelage under Dr. Odili that had made him accomplish his political successes.

He reiterated that the benevolence of the Odili’s made it possible for Ikwerre sons to emerge governors of Rivers State.

In his response, former Rivers State Governor, Dr. Peter Odili said he and his wife, Hon. Justice Mary Odili (retired) were overwhelmed by the birthday gift courtesy of the State government.

Odili explained that during his tenure as governor, governor Wike was the best performing council chairman in the State.

He lauded Wike for investing in human capacity development, infrastructure, and building the best Law School campus in Port Harcourt.