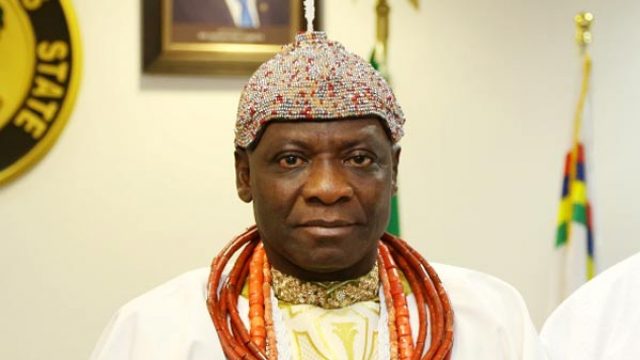 The Olu of Warri, His Majesty Ogiame Ikenwoli, has explained why those he called outsiders control the oil blocks in the Niger Delta region, particularly in Delta State.He attributed the development to lack of unity among the various ethnic groups inhabiting the region, which emboldened outsiders to take over their resources.

The monarch, who spoke at the weekend in his palace during the installation of three new chiefs in the kingdom, said inter-ethnic rivalry was the reason the region could not attain its full potential thereby creating a corridor for outsiders to implement “a divide and rule” diplomacy and take control of the resources of the region.

Ikenwoli, who warned that “personal interest” was not allowing the dividends of democracy get to the grassroots, charged the ethnic groups to work collectively together for the development of the state and region, stressing that until there is comprehensive unity, the much sought after development in the region may be a mirage.

The monarch said: “The Ijaw man should fight the cause of the Itsekiri and the Itsekiri man should support the Ijaw man, including the Isoko and the Urhobo. If we are united, outsiders will be afraid to divide us. Because we created loopholes for outsiders to exploit us, today, no Itsekiri man or Ijaw man has oil well or oil block, yet the oil is in our land.”

In another development, host-community contractors in Bayelsa State have vowed to shut down Conoil Producing Nigeria Limited in Koluama community of Southern Ijaw Local Council of Bayelsa State over N400 million debt owed them by the firm.

The contractors, under the auspices of Conoil Ango Field Marine Spread Contractors, claimed the oil major owed them for about 10 months for the barges and tugboats hired from them for its operations.

In a petition, a copy made available to The Guardian in Yenagoa, which was addressed to the management of Conoil, the contractors said they had patiently waited since December 2016 until September 2017, but the company had yet to pay them for their services and equipment.

Meanwhile, the Public Affairs Manager, Conoil, Mr. Richard Edegbeai, confirmed that the company was owing the contractors.Edegbeai, who urged the contractors to exercise patience, said the firm was making frantic efforts to pay them. He, however, blamed them (contractors) for going to the media over the development.He said that when the going was good with them, nobody heard anything.

Edegbeai stated: “The ones they have collected before, did they go to the media houses to report that Conoil was paying them promptly? I do not understand them. If you are doing contracts, and for one reason or the other, there is delay in payment, they should understand.

‘’When it was good, nobody heard. They did not go to any place to report. Yes, it is true that we are owing them and we are processing the money. A cheque of N200 million was to be given to them last Friday, but somehow, the cheque did not come on time.”