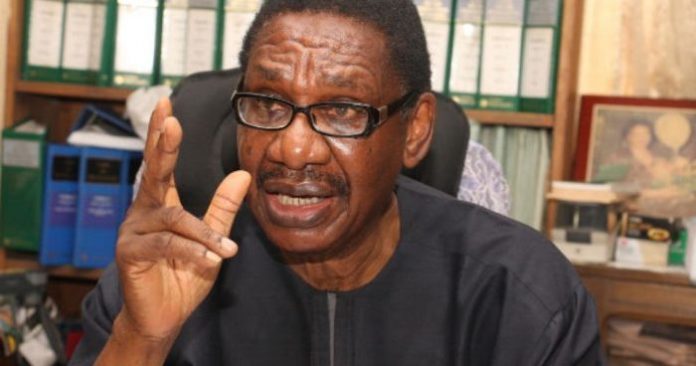 The Chairman of the Presidential Advisory Committee Against Corruption, Prof. Itse Sagay (SAN) has blamed the apparent increase in corruption within the judiciary on both lawyers and judges

Speaking in an interview with Punch Newspapers, the law professor specifically fingered judges who cover up their corrupt colleagues as the cause of the rot currently pervasive in the judiciary.

He accused judges of shielding and defending their colleagues notwithstanding their corrupt involvements in a bid to protect the overall perception about the judiciary. A trend which is sad has continued to pamper the growth of corruption in the institution.

“I’m not the most popular among them, but like any other institution, there will be some members who do wrong things. There are corrupt judges; there is no question about that. No judge can say every judge is upright. Some were dismissed in the past; we know them. But what I noticed in my little interaction with the judiciary is that they feel offended if you raise the issue of corruption in the judiciary. Even the good ones feel all of them are being accused, so they become defensive.

They even try to defend the corrupt ones among them just to expel any idea of corruption and I think that is the greatest danger or problem we have in trying to end corruption in the judiciary.

“The fact that the good ones will not separate themselves from the corrupt ones or partner with any organisation that wants the corrupt ones out does not help. Instead, they feel offended and try to accommodate those who are bad, even though they know they are bad. I have seen that at every level of the judiciary and it saddens me. There is this espirit de corps. Regardless of what you have done, once you are in the judiciary, you are untouchable.”

Further expressing his opinion about corruption within the judiciary, he pinpointed corrupt lawyers as the root cause.

He stated that given the deplorable working conditions and unsustainable renumeration for judges in the country, litigants are quick to bait judges with juicy offers through lawyers to pervert the course of justice.

“Unfortunately, it is lawyers, my colleagues, who have polluted the minds and culture of the judiciary. They introduced to the poor judges huge sums of money they could not have imagined in 10 lifetimes.

“Some lawyers make to the poor judges offers that cannot be refused. That’s where it starts from. If you can stop the lawyers, that problem would virtually be solved, because it’s very rare for a client to go directly to a judge for that purpose.”

He suggested that to stem corruption within the judiciary, the welfare of judges must be improved and the judiciary must conduct self cleansing by purging the tainted ones of the system instead of shielding them.

“Nevertheless, we should go out of our way to make judges comfortable. Pay them good salaries and help them to have their own accommodation after retirement. I think with these, many judges would resist bribery. I have not interviewed anyone, but I believe it is out of desperation that some do it, with the thought of how to survive when they retire…..

“If we do not break this espirit de corps issue, judicial corruption will not be solved. I think we need some very hard approach by the anti-corruption agencies. They are doing well but we need to do more,” he added