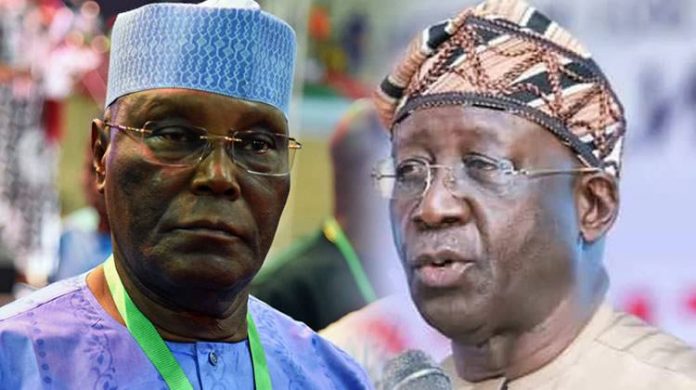 The National Chairman of the Peoples Democratic Party, Senator Iyorchia Ayu, disclosed yesterday that he rejected a suggestion from the party’s presidential candidate, Atiku Abubakar to take a loan of N1bn.

According to Ayu, the idea was, however, rejected.

Ayu explained that when he assumed office as the chairman and needed to raise money for the party, he did;t take money from the party as suggested by Atiku.

He said he refrained from commenting on Wike’s allegations against him to avoid public altercations that could complicate matters for the party.

Wike had in a media chat on September 23 accused Ayu of collecting N1bn from a presidential aspirant, which according to him, aided the emergence of Atiku as the party’s presidential candidate.

“Can Ayu deny that he did not collect N1bn from Lagos? He told one of the PDP presidential aspirants before the primaries that the governors were not ready to fund the party,” he said, claiming that he knew “how the money was arranged and those involved in packaging the money. He N1bn; let him come out to tell Nigerians (that) it is not true and I will reveal more,” Wike said.

”In his latest media chat on Friday, the governor said he stood by his claim, alleging further that the party chairman collected N100m from a governor to renovate the Peoples Democratic Institute, a subsidiary of the party, and that he turned round to collect the same amount from the party.

But responding to the governor’s claims during a press briefing at the end of a special Board of Trustees meeting at the party’s headquarters after the BoT Chairman, Senator Adolphus Wabara, had submitted the report of his reconciliation committee, Ayu said the consistent attacks on his person were unfortunate.

He stated, “When my BoT chairman talks, I am not supposed to say anything more. But since these allegations have persisted, I want to use this opportunity to clear the air. When the first allegation was made about the N1bn, I decided not to respond because we don’t want to cause altercations in the party.

“However, I want to make it clear that at no time did I, as the national chairman of this party, collect any N1bn from anybody.

“So, I state that I never collected N1bn from anybody. Also, the N100m that was donated by one of the governors has been judiciously used for the purpose (for which) it was given.

“When we came in and the party had funding difficulties, the current presidential candidate suggested that the party should take a loan of N1bn from a bank. The owner of that bank was also an influential member of this party. He has left the party now.

“When we discussed it with him, we discarded the idea and the party never took any loan or any money from anybody. I, as a person, never collected N1bn from anybody. Any money advanced to the party was declared before the National Working Committee and handed over to the national treasurer of the party.”

He added that the party remained transparent in its financial dealings and it would not renege on its promise to present its audited account to the public by December.

Ayu also spoke on Wike’s allegation that he collected N100m from a governor and the party to relocate the PDI.

“Ayu collected N100m from a governor. Let him (Ayu) say no that it is not true and I will tell you the governor. People don’t know these things,” the governor said during Friday’s media chat.

In his response, Ayu stated, “Luckily, I had fully briefed the board that one of our governors made a contribution of N100m to the revival of the Peoples Democratic Institute, which was housed in a portakabin. And we explained to them that we hired an appropriate place in Asokoro; we have renovated it and furnished it.

“Two or three days ago, we went there to inspect the place and the NWC decided that even before inauguration, we should invite the governor in question to come and inspect what we have done with his money. I am happy to state that the national secretary of the party has since written a letter to that governor.

“So, it is not true. Neither I nor the NWC ever took any money belonging to the party to carry out the renovation. In fact, we have not even exhausted that N100m, which was donated by one of the governors.”

Meanwhile, the party chairman has asked Wike to leave his family out of the issues in the party.

He was reacting to the statement by Wike that if he revealed all he knew about Ayu, his children would disown him.

“If not for the love of this party, if we release what we have, Ayu’s children will tell him that ‘you are no longer our daddy,’” Wike said during the media chat.

But Ayu stated, “The consistent attacks on my person since the end of the (special) convention on May 31 are deliberate and unfortunate. I have restrained myself from reacting. As the father of the party, I felt that I should encourage reconciliation.

“But where it touches on my personal integrity, of which even my own family members are brought into play, it is incumbent upon me to reply.”

He appealed to aggrieved party chieftains to spare his family members in their quarrels with him and the leadership of the party.