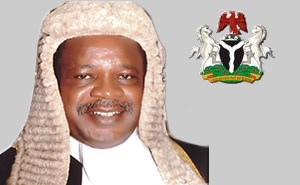 In his speech to mark the commencement of the new legal year, Justice Auta also explained  why the court refused to declare the seats of some lawmakers who decamped from the party that brought them to power to other parties.

The Federal High Court had dismissed two suits seeking the disqualification of Buhari from the 2015 presidential election.

It was Justice Adeniyi Ademola of Federal High Court, Abuja, who struck out the two suits which were pending before his court.

Speaking on the issue yesterday, Justice Auta who will be retiring from the bench of the court on September 16, 2017, explained that the attempt to stop President Buhari from contesting the election was refused by the court because the court preferred a level playing ground to all candidates.

“Attempts to stop the president from contesting was also rejected by this court. This was because we, in the Federal High Court, preferred a level playing ground to all candidates.

“It is the option and insistence of this court that has kept the country together during and after the election. The nation, therefore, owes it to the judiciary and, particularly, Federal High court for the unity of this country,” Justice Auta explained.

Before the 2015 presidential election, there was raging controversy over the academic qualification of Buhari for the election which he eventually won.

Supporters of the then ruling Peoples Democratic Party (PDP) had alleged that Buhari did not meet the constitutional requirement of a secondary school certificate for the post of the president.

The issue later culminated into the filing of no fewer than 10 suits seeking his disqualification on different grounds. All the suits were consolidated since they sought the same relief.

In one of the suits, Chukwunweike Okafor sought an order compelling the Independent National Electoral Commission (INEC) to remove or delete Buhari’s name and that of the APC from the list of persons and political parties eligible for the office of president.

Okafor asked the court to hold that the information supplied by the APC flag-bearer in Form C.F 001 that his West African School Certificate was with the Nigerian Army was false, so he should be disqualified from the race.

In another suit, Max Ozoaka asked the court to disqualify Buhari on the ground that the Form Cf 001 which the APC candidate submitted to INEC was incomplete.

He argued that Buhari failed to accompany the form with all relevant academic credentials.

Ozoaka also raised objections regarding some of the information contained in other documents submitted by the APC candidate, including voter’s card.

Justice Auta further disclosed that despite all the pressures to stop certain members of the National Assembly as a result of their defection to other parties, the Federal High Court also stood its ground against such pressures.

“Despite all pressures to stop certain members of the National Assembly as a result of their abandonment of the party that brought them to power, the court insisted that every candidate must be allowed to test his/her popularity,” Auta stated.

He disclosed that 10 more judges of the court will be appointed to further enhance its manpower and the administration of justice.

He admonished the judges to be courageous in the discharge of their duties and not to be distracted or afraid of persecution.