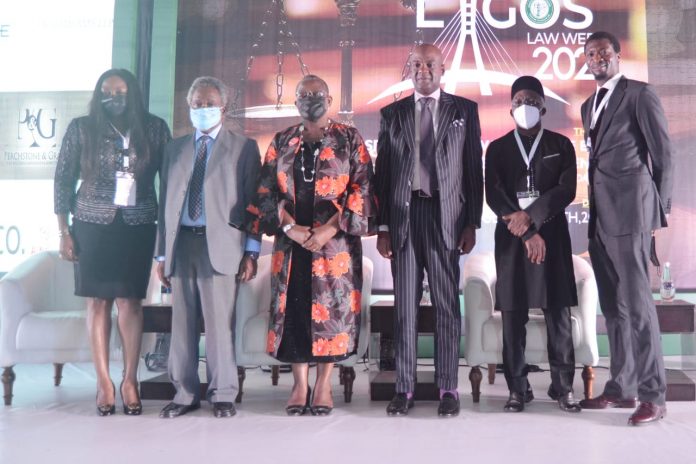 We always knew it would come back to haunt us. When President Muhammadu Buhari declared, in front of a roomful of lawyers in Abuja in 2018, that under his regime, the very notion of the rule of law (and fundamental human rights) would take a back seat when it comes to ensuring national security, not a few objective obervers feared that Nigeria might be on the threshold of an authoritarian winter.

Events since then seem to have proved them right.

Which raises the question: To what extent should the protection of national security be an acceptable rationale for setting aside the laws by which a civilized society is run? In his run for US President in 2008, the then-Senator Barack Obama bemoaned what he called ‘the false choice’ between freedom and security the outgoing Bush administration had presented to Americans as part of its War on Terror.

Was Buhari’s 2018 declaration a ‘false choice?’ That was the issue that occupied the opening plenary session of the 2021 NBA Lagos Law Week, which sat to explore the topic: ‘National Security and our Fundamental Rights.’ It was a clear-eyed assessment of recent encroachments by the government of Nigeria on fundamental rights on the grounds of ensuring national security, and featured a stellar cast of well-known players in Nigerian political discourse, in the persons of Dr. Oby Ezekwesili;  Mr. Femi Falana, SAN; and Profs. Akin Oyebode and Chidi Odinkalu.

In his opener, the moderator,  Mr. Charles ‘Deji Adeogun-Phillips, a former UN genocide and war crimes prosecutor, referenced recent events such as the government’s ban on Twitter in Nigeria; the abduction of IPOB leader Mazi Nnamdi Kanu; the raid of the home of Yoruba Nation campaigner Sunday Igboho; the #ENDSARS protests and their tragic aftermath; as well as the massacre of Shiite followers of the cleric Ibrahim el-Zakzaky in Zaria some years back and his legal travails, among others, and asked if the government’s actions in these instances were justifiable on the grounds of national interest.

NEWSWIRE’s correspondent at the MUSON Centre venue of the gathering reports that both Dr. Ezekwesili and Prof. Odinkalu sought to make the critical distinction between ‘national’ interest and ‘regime’ security, and made the point, rather forcefully,  that the government was merely engaged in the protection of regime interest, no more, no less. National interest, they affirmed,  was by definition the citizens’ interest before it is anything else – a fact of which this government is either sadly unaware or has simply thrown overboard in its pursuit of some sinister agenda.

On her part, Dr.  Ezekwesili cited the Twitter ban (a result of Buhari’s private quarrel with the tech giant) as an example of this petty personalision of ‘national’ interest. She also cited the results of a longstanding research she had carried out, which graphically demonstrated the nexus between the quality of a nation’s politics and it’s economic trajectory. In view of the Buhari government’s disregard for civilized norms, she said, it is no wonder Nigeria’s economy is doing so badly. This nexus, she added, was why she decided to lend her weight to the recent legal action by the civil society group SERAP against the federal government, and challenged the NBA to rise to the challenge of the moment. She also called for a sincere national conversation in a bid to forge a nation in the proper sense of the word – a nation in which ‘Citizen’ is the highest office in the land, and his protection is the most sacred function of government.

In his lengthy presentation, Femi Falana, SAN, likened the stance of the administration to that of Louis XIV, the notorious French king who said, “I am the state,’ to underscore his omnipotence. Falana went on to recount his personal experience in combatting the various human rights abuses of this regime, and also reminded the assembled audience of the extreme instances in which personal liberties could be set aside – a prime example being during wartime. Even then, he said, it is the judiciary – rather than an overweening, self-interested executive – that gets to make such a distinction.

Also, Prof.  Akin Oyebode, retired lecturer in international affairs in the University of Lagos, called on Nigerian lawyers to seek recourse to international law provisions such as the African Charter for Human and People’s Rights – which have since been codified into law by many nations, Nigeria inclusive – to adjudicate on matters such as rights violations.