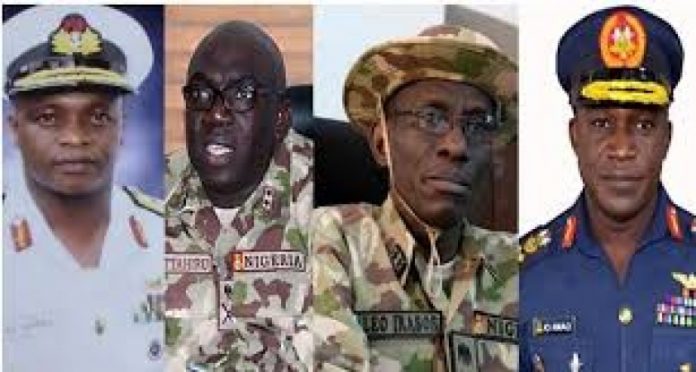 What we Expect from New Service Chiefs, by Nigerians

Nigerians on Tuesday set agenda for the new service chiefs.

They expect more respect for human rights and innovation in the fight against insurgency, banditry and kidnapping.

The National Assembly, governors, the All Progressives Congress (APC), the Peoples Democratic Party (PDP), major socio-cultural groups and other eminent Nigerians want the service chiefs to “hit the ground running”.

President Muhammadu Buhari yesterday announced the resignation/retirement of the service chiefs and their replacements.

The Presidency promised new vigour and fresh onslaught in the battle against insurgency.

The Senate, through its spokesman, Senator  Surajudeen Basiru, praised the outgone service chiefs for their efforts and expressed hope that the new appointees will do better.

Basiru said: “The former Service Chiefs are commended for their service to this great country and coming at a time of security challenges they have creditably performed to the best of their ability.

“For the newly announced appointments, we hope that by the time the Senate scrutinises their record they would be fit and proper for appointment under the law.

“We also believe that it is part of the continuation of facing the challenge of insecurity in Nigeria which the Senate has dedicated its time and energy to see how we can tackle the problem headlong.

“So we hope that by the time the requirements of their appointments are finally laid, the new Service Chiefs will dedicate themselves to squarely tackle the problem of insecurity, particularly the Boko Haram insurgency, the problem of banditry and the general security of the territorial integrity of Nigeria.”

The House of Representatives, through its spokesman, Benjamin Kalu, called for support for the new men.

“We want to thank the former service chiefs for serving the nation to the extent they did and wish them well. We also want to thank Mr President for listening to the people and for accepting their resignation.

“The question then is, what does that hold for us? It does not automatically mean that these are the messiah of Nigeria security architecture.

“But suffice it to say that these that are just coming in have a burden on their shoulder to bridge the gap already observed by them when they were watching the leadership of those who just left,” Kalu said.

Senate Minority Leader, Enyinnaya Abaribe, said it is left to be seen how the new service chiefs would turn the tide on insecurity in the country.

“Better late than never. We had been calling for this for a long time now. Let’s hope this team would stem the tide of insecurity,” he said.

In a statement by his spokesman, Mr Olisa Ifeajika, the governor said the sacrifices of the new defence chief, especially his acknowledged gallantry at assignments, were outstanding.

The governor urged Irabor to ensure that under his watch, Nigeria would record improvement in military-civil relations and that he should continue to uphold the territorial integrity of the nation.

Rivers State Governor, Nyesom Wike, in a statement by his Commissioner for Information and Communications Mr. Paulinus Nsirim, noted that though the appointments came late, the President should be commended for listening to the voices of the people.

“The new Service Chiefs should not politicise security by aligning with politicians. What the country needs now is competence and professionalism that will reduce insecurity to the barest minimum,” he said.

Wike noted that Nigerians, who lost confidence in the former service chiefs, were looking up to the new appointees to make the desired change.

The APC, in a statement by its Caretaker/Extra-Ordinary Convention Planning Committee (CECPC) Secretary, Senator John AkpanUdoedehe, is optimistic that the new appointees will hit the ground running.

The statement reads: “The APC welcomes the appointment of new service chiefs following the resignation and retirement of the outgoing service chiefs.

“We are confident that the new service chiefs will consolidate on the remarkable achievements of their predecessors in keeping the country safe and peaceful.”

The party called for public support for the new service chiefs, adding: “We also urge increased synergy among the armed forces in achieving these tasks.”

The PDP described the appointments as rather late in the day, saying much harm had already been done to national security.

The statement said in part: “Such unpatriotic, self-conceited and narrow-minded approach to leadership is responsible for the escalated insecurity and avoidable loss of lives; economic recession with excruciating hardship as well as widened divisions in our land under Buhari’s watch.

“If Mr President had acted when our party and other well-meaning Nigerians, including the two chambers of the National Assembly, impressed upon him to do so, the security situation in the country would not have degenerated to this abysmal level.

“We hope President Buhari uses this as a turning point to learn to listen to wise counsel and not always set our nation on the path of destruction before acting.

“Nevertheless, our party expresses hope that the new service chiefs will brace up to the challenges of our nation and note that their appointment at this time, more than at any other point in our national history, demands a huge sense of commitment, responsibility and determination to secure our nation and restore peace, order and national cohesiveness in our polity”.

The PDP urged the new service chiefs to take urgent steps to restore professionalism, boost the morale of troops and to ensure that they do not fall into the “indolence, corruption, recklessness, abuse of process and partisanship that characterized the tenure of the last service chiefs”.

PANDEF, in a statement by its spokesman, Ken Robinson, expressed optimism that the service chiefs would discharge their duties in the interest of the nation.

It said though the sack of the former service chiefs was long overdue, the President responded to calls by well-meaning Nigerians.

“We congratulate the new service chiefs while hoping that they would discharge their duties and responsibilities professionally, without biases and tendencies in the best interest of the country,” PANDEF said.

The IYC, through its President, Peter Timothy Igbifa, urged the new “sheriffs in town” to tackle issues of banditry, bloody highways, and the menace of the armed herdsmen ravaging communities, including the Ijaw territories.

Igbifa said there was no room for excuses and called on the service chiefs to restore the dying morale in the military.

The group urged the President to make funds available for the provision of necessary tools in the discharge of their duties.

Igbifa said: “These new service chiefs have a lot to do. We do not want excuses again.

“We want to see the termination of banditry, insurgency, kidnapping, highway armed robberies and the nefarious and bloody activities of the armed Fulani herdsmen, who are ravaging our Ijaw communities and other settlements across the country.”

The ARG, through its chairman, Mr. Olawale Oshun, said the change was welcome because “certainly there is a need for a change of leadership within the security industry”.

Oshun, a former federal lawmaker during the aborted Third Republic, said the new Service Chiefs must put the interest of Nigeria before that of their ethnic nationalities.

He said: “Nigeria has never had it this bad, which is to say there is failure one way or the other in the security architecture that had been in place.

“Also, we understand that all the heads of the security forces are due for retirement; in fact, some of them have been for retirement before now. So, the proper thing must be done.

“Since the President has done it, we can only hope that those who are coming in will come in with a new commitment to Nigeria. They must not allow the biases of their ethnic nationalities to influence their judgments because Nigeria is a very critical crossroads.

“As a result, we need to have Nigerians who love Nigeria, not those that give preferences to the interests of their ethnic nationalities.

“If you are holding a national office and you are serving Nigeria, then you must take the entire country as your constituency.”

The CNG hailed the appointment of the new service chiefs, urging Nigerians to show them maximum cooperation as they battle security threats.

In a statement by its spokesperson, Abdul-Azeez Sulieman, the group urged the service chiefs to get community leaders and the civil society involved in the war against insurgency.

It expects them to disband all militias and armed groups to ensure that none can challenge the state.

“We expect a renewed commitment by our gallant troops and a stronger will from President Buhari in the fight against Boko Haram, bandits and other forms of criminality without the need for floating victory in the media,” CNG said.

Second Republic politician, Alhaji Tanko Yakasai, urged the new service chiefs to do their best to change the ugly security situation in the country.

He added: “My advice to them is to consider the plight of the nation over the security challenges at the moment in their new postings. I hope that they would do their best to change the situation for the better.

“The idea behind retiring at a certain age is for the old hands to leave the stage and provide opportunities for younger officers to bring fresh ideas in tackling the country’s security challenges.

“We hope that the new service chiefs bring innovation to improve the security situation in the country.”

An APC stalwart, Chief Chekwas Okorie, said the expectations of Nigerians are very high and so “the service chiefs must do something different and urgently too for their appointment to be considered well deserved”.

He added: “They should hit the ground running. There is no doubt that the outgoing service chiefs are being praised for a job well done, but many Nigerians felt that they no longer had new ideas to contribute in the last two years.

“Since the new service chiefs were not imported from outside Nigeria, they are familiar with the yearnings and frustrations of Nigerians as far as the security situation in the country are concerned and therefore should know what the expectations of the people are. Therefore, they should be able to justify their appointment.”