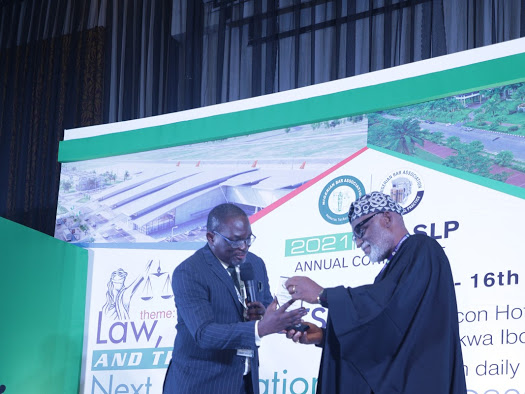 Participants at the Premium Session of the 2021 Annual Conference of the Nigerian Bar Association’s Section on Legal Practice (NBA-SLP) in Uyo, Akwa Ibom State, were unanimous about one thing, at least: Nigeria is NOT working. Nor did they differ much on the urgent imperative of fundamental and drastic reforms across the board in a bid to salvage it and ‘Making Nigeria Work for Us (as the theme says).

Newswire Law and Events Magazine’s correspondent at the Ibom Icon Hotel and Golf Resort, venue of the SLP Conference, reports that the session, which was chaired by the immediate past President of the NBA, Paul Usoro, SAN, comprised of a stellar cast of speakers including the Governor of Ondo State, Arakunrin Rotimi Akeredolu; the Deputy-Governor of Akwa Ibom, Moses Ekpo, who represented Governor Udom Emmanuel, and the Rivers State Attorney-General, Prof. Zach Adangoh, SAN (who sat in for Gov. Nyesom Wike). Two other panelists – Prof. Pat Utomi, one of Nigeria’s foremost political economists, and media entrepreneur and civil society advocate -Kadaria Ahmed – spoke virtually at the Session.

The most obvious ndication of Nigeria’s dysfunction, said Aketi in his remarks, is her regression from previous levels of performance, especially as regards the quality of life of its people.

He recalled his childhood in Owo, Ondo State, when most homes had piped water running in them – a far cry from what obtains today.

In spite of a few oases of excellence here and there, Akeredolu added, the poverty, mass unemployment and growing insecurity confronting Nigeria today are the results of our inability or unwillingness to make the effort to build a nation out of our diverse ethnic and religious identities.

It is time, Aketi stressed, to subsume these other identities under one Nigerian identity if our experiment in democratic governance and nation-building is to succeed.

In any case, the Governor said, the Nigerian crisis, at its core, is really not about our ethnic or religious cleavages – but about class, the tension between the haves and the have-nots in society. Poverty, he concluded by saying, is the most dangerous threat to the rule of law and the practice of democracy, and therefore must be addressed head on – even it means challenging the complacency of the rich on behalf of the poor.

In her summation, Kadaria Ahmed, who is known across the nation for her incisive interviews with presidential candidates in successive elections in Nigeria, as well as the unique  perspectives she brings to the table of public discourse, began by lamenting the lack of an equal platform for diverse voices in the national discourse, no thanks to the depredations of a rapacious ruling elite more interested in their narrow self-interest than for the public good.

The prospect of Nigeria’s ultimate failure as a  state, on the precipice of we are now precariously poised, she said, is a gift to all the nefarious forces within and outside Nigeria, including the political class, who are busily exploiting the ‘distractions’ (as she put it) of secessionist agitations to widen our present fault lines.

Since most stakeholders have correctly identified our present Constitution as a key impediment to progress, and that the power to amend, review or overhaul it altogether lies with the National Assembly, it is up to all Nigerians to apply sustained pressure on our federal and state legislators to deliver on the already identified bottlenecks – most notably restructuring and devolution of powers; a more equitable revenue sharing formula, etc.

Popularly known as Uncle Mo, the Akwa Ibom State Deputy-Governor, Mr. Moses Ekpo, sounded rather irritated at the monotonous recurrence of the questions being posed by this Session, stressing that these issues had already been addressed comprehensively at various forums in the past – most notably during the meeting of the Southern Governors Meeting in Asaba, Delta State only a few weeks ago.

For purposes of emphasis, however, he reiterated the need for key stakeholders in the Nigerian enterprise to address the following as a matter of urgency: the reform of the legislative lists with an emphasis toward decongesting the exclusive list; restructuring and devolution of powers away from the centre; fiscal federalism (which he said was not at all strange to our laws); electoral reform; judicial independence and financial autonomy; gender parity and women’s participation in governance; a robust security architecture characterised by multi-level policing; and constitutional guarantees of social, economic and human rights.

On his part, Prof. Adangoh, made the point that the concept of federalism was, in the first instance, designed to address the problems that naturally arise from a union of disparate ethnic groups.

Nigeria’s so-called federalism is mangled and distorted precisely because it has been sacrificed on the altar of the very problems it was designed by the founding fathers to address, notably the possibility of ethnic domination and oppression. For this reason, he says, Nigerians are ‘yoked to a centre, but separated in every other sense.’ Citing the Swiss, American and Canadian federal models, he stressed that federalism is a matter of conscious choice, and where it fails to meet the need, there will be agitations and threats to law and order, like we are currently seeing, and physical attempts to undermine it by non-state actors.

Like Uncle Mo, the professor of law advocated a devolution of powers and a change in the legislative list in a way that empowers states to deliver on what he called the benefits of citizenship.

Speaking from Chicago, Illinois, USA, Prof. Utomi decried the absence of a shared sense of values among Nigerians as a platform on which to build our nation.

The natural consequence of this, he said, is that our political parties are no parties at all, but simply instruments of state capture and weapons of elite conspiracy wielded by mere adventurers masquerading as politicians, whose actions and utterances show their utter contempt for the people.

There has to be a serious effort and a mechanism that recalibrates the relationship between the governed and their leaders, in a way that practicalizes the democratic notion that leaders are actually the servants and agents of the people. Enough of the idolization of the political ‘big men’ and Excellencies strutting across our landscape like demigods who have forgotten the purpose of their power, Utomi said.

The lively session ended with a brief discussion on the justiciability or otherwise of certain sections of the Nigerian constitution, with a challenge to the judiciary to take the bull by the horns in that regard – especially in light of the powers it set to wield with the imminence of full autonomy and independence.