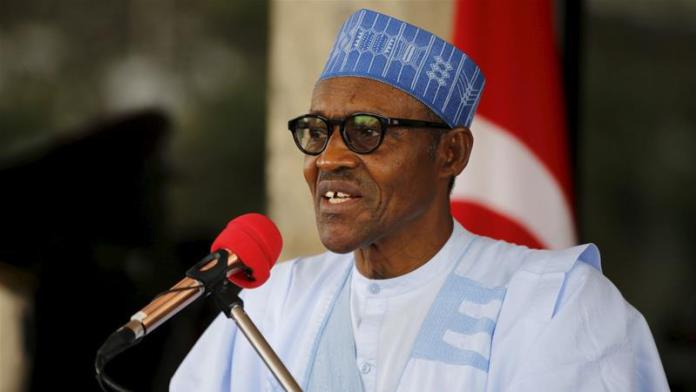 President Muhammadu Buhari on Sunday morning reasserted his stance on the restructuring debate that the National Assembly is the proper and legal forum to address ongoing call to restructure the country.

He faulted the national conference organised by former President Goodluck Jonathan and others, saying national debates should be handled by the federal legislature and not some lopsided, undemocratic body with predetermined set of objectives.

The president restated this in a live broadcast to the nation to mark Nigeria’s 57th Independence Day celebration, which was on national television and radio stations at 7:00am today
He regretted that some highly irresponsible groups were hiding behind the restructuring debate to call for dismemberment of the country.

Buhari noted, however, that the country has recorded appreciable gains in political freedom in the past two years.

“In the past two years, Nigeria has recorded appreciable gains in political freedom. A political Party at the Centre losing elections of State Governor, National Assembly seat and even State Assemblies to the opposition parties is new to Nigeria”, he observed.

Insisting that the National Assembly remains the proper platform address the national debate on restructuring, the president also took a swipe at South East leaders for not calling the agitators for secession in their domain to order.

He said, “Recent calls on restructuring, quite proper in a legitimate debate, has let in highly irresponsible groups to call for dismemberment of the country. We cannot and we will not allow such advocacy.

“As a young Army Officer, I took part from the beginning to the end in our tragic civil war costing about 2 million lives, resulting in fearful destruction and untold suffering. Those who are agitating for a re-run were not born by 1967 and have no idea of the horrendous consequences of the civil conflict which we went through.

“I am very disappointed that responsible leaders of these communities do not warn their hot-headed youths what the country went through. Those who were there should tell those who were not there, the consequences of such folly.

“At all events, proper dialogue and any desired constitutional changes should take place in a rational manner, at the National and State Assemblies. These are the proper and legal fora for National debate, not some lop-sided, undemocratic body with predetermined set of objectives.”

For the Niger Delta, the president was full of praises for leaders of the region, even as he said, while the federal government is sustaining the thrust of dialogue with the people, it is determined to address grievances that are genuine.

“Added to these are complete freedom to associate, to hold and disseminate opinions. Such developments clearly attest to the country’s growing political development. But like all freedoms, this is open to abuse.”

Buhari noted that October 1st remains a special date for all Nigerians as it marks the day when they attained one of the most valuables of human needs, which is freedom.

Over the years, he said, the country has gone through trials and tribulations, noting however that October 1 had always been a day for celebrations in the country.

“It is a day for thanks giving, reflection and re-dedication. It is also a day for remembrance. We should remind ourselves of the recent journey from 1999 – 2015, when our country happily returned to democratic rule”, he pointed out.

He, however, regretted that even though oil prices stood at an average of $100 per barrel and about 2.1million barrels per day during this period, that great piece of luck was squandered by previous administrations, abandoning the country’s social and physical infrastructure.

His words: “We were left with no savings and huge infrastructure deficit. The APC Government’s Campaign rallying cry to restore security, re-balance the economy and fight corruption was not all rhetoric.

“The country must first be secured. The economy must be re-balanced so that we do not depend on oil alone. We must fight corruption which is Nigeria’s Number One Enemy. Our Administration is tackling these tasks in earnest”.

On security, Buhari urged Nigerians to be grateful to the military for rolling back the frontiers of terror unleashed by the Boko Haram terrorists by defeating them and reducing them to cowardly attacks on soft and vulnerable targets.

He expressed the country’s gratitude to its neighbours and the international community for the collective efforts in defeating terrorism, which he describe as world-wide menace.

He said, “Not even the most organized and most equipped police and security forces in the world can escape the menace of modern day terrorism, as we have seen in recent years in Europe and other parts of the world.

“But we are not letting up. Our Armed Forces in an effort to enhance the operational capability of troops of OPERATION LAFIYA DOLE have established Mobile Strike Teams in the North East. These will ensure the final push to wipe out the remnants of Boko Haram.”

He added that through targeted air strikes most of the leadership and identified logistics bases and routes of the insurgents have been neutralized, with the Armed Forces have establishing a Naval presence in the Lake Chad Basin as part of the coordinated military efforts to curtail the movements or re-emergence of the sect in the area.

The president assured that government is working round the clock to ensure the release of the remaining Chibok girls, as well as other persons in Boko Haram captivity.

“Government will continue to support the Armed Forces and other security agencies to fight not only terrorism, but kidnapping, armed robberies, herdsmen/farmers violence and to ensure peace, stability and security in our country”, he stated.

On the nation’s economy, Buhari explained that the government has remained pro-active in its diversification policy.

He said that the federal government’s agricultural Anchor Borrowers Programme, which he launched in November 2015, has been an outstanding success, with N43.92 billion released through the CBN and 13 participating institutions and 200,000 small holder farmers from 29 states of the federation benefiting, as well as 233,000 hectares of farmland cultivating eight commodities, namely Rice, Wheat, Maize, Cotton, soya-beans, Poultry, Cassava and Groundnuts, in addition to fish farming.”

Noting that these initiatives have been undertaken in close collaboration with the states, he commended the efforts of the governors of Kebbi, Lagos, Ebonyi and Jigawa States for their support to the rice and fertilizer revolutions.

He equally commended the contributions of the governors of Ondo, Edo, Delta, Imo, Cross River, Benue, Ogun, Kaduna and Plateau States for their support for the presidential initiative for palm oil, rubber, cashew, cassava, potatoes and others crops.

He further stated that with the abundance of rainfall last year and this year, agriculture has enjoyed Divine intervention.

His words: “Since December last year, this Administration has produced over 7 million 50Kg bags of fertilizer. Eleven blending plants with a capacity of 2.1 million metric tons have been reactivated. We have saved $150 million in foreign exchange and N60 billion in subsidy. Fertilizer prices have dropped from N13,000 per 50Kg bag to N5,500.

“Furthermore, a new presidential initiative is starting with each state of the Federation creating a minimum of 10,000 jobs for unemployed youths, again with the aid of CBN’s development finance initiatives.

While admitting that power remains a huge problem, Buhari noted that as of September 12th, production of power reached an all — time high of 7,001 Megawatts and Government is increasing its investment, clearing up the operational and financial log jam bedeviling the industry” We hope to reach 10,000 Megawatts by 2020.

“key priorities include better energy mix through solar and Hydro technologies. I am glad to say that after many years of limbo, Mambilla Power Project has taken off”.

According to him, since April about $7 billion has come through this window alone and the main effect of these policies is improved confidence in the economy and better investment sentiments.

He said the country has recorded 7 consecutive months of lower inflation, as Naira rate is beginning to stabilize, appreciating from N525 per $1 in February this year to N360 presently.

The president noted that the federal government did so to enable states pay outstanding salaries, pensions and small business suppliers who had been all but crippled over the years.

On Corruption, Buhari said his administration was fully aware that fighting corruption was never going to be a straightforward task.

He said, “We expected corrupt elements to use any weapon to fight back, mainly judicial obstruction and political diversion. But we are determined to eradicate corruption from our body politic.

“In this fight, the Government has: Empowered teams of prosecutors, assembled detailed databases, accelerated the recovery of stolen funds”.

He listed the administration’s new institutional reforms to include enforcing of the Treasury Single Account, Whistle-Blowers Policy, Integrated Payroll Personnel and Information System.

Buhari continued: “We have signed multi-lateral cooperation agreements on criminal matters with friendly countries. There are signs of increasing cooperation from the Judiciary.

Recently the Chief Justice of the Federation directed Heads of all our Courts of first instance and Appeal to accelerate hearings of corruption cases and dismiss any judicial officers found to have been compromised. Justice Salami has just been appointed to chair the Judiciary’s anti-graft committee. Government expects a lot from this Committee”.

He commended the National Assembly for refocusing its oversight committees, saying they should, in addition, ensure swift passage of enabling corruption laws.

Noting that fighting corruption is a bottom to top operation, He said, “I call on all Nigerians to combat corruption at every turn. By not asking for and refusing to accept a bribe, by reporting unethical practices or by blowing a whistle, together we can beat corruption. The government for its part will work for accountability at all levels – Federal, State and Local Governments. CHANGE will then be real.

“As we enter the second half of our term of office, we intend to accelerate progress and intensify our resolve to fix the country’s challenges and problems”.