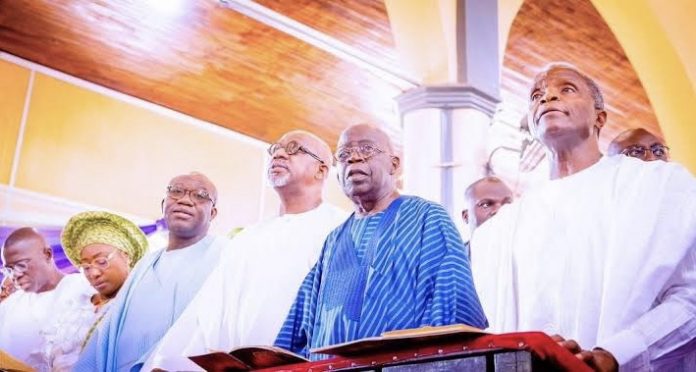 Presidential candidate Bola Tinubu has appealed to Nigerians not to give up on their leaders though “there might be weaknesses and inadequacies in expectation.”

Mr Tinubu, the flag bearer of the ruling All Progressives Congress in the 2023 election, spoke on Saturday at the funeral of the mother of Ondo State governor Oluwarotimi Akeredolu in Owo.

Responding to complaints on the failures of the political class by Reverend Stephen Fagbemi, the officiating minister, Mr Tinubu admitted that “no one wants failure” but appealed that the people should not abandon him and his party.

“You cannot give up on us. We will do better. We will contribute to the improvement you might want,” the presidential hopeful assured.

During his sermon, Mr Fagbemi lamented the prevailing economic hardship and underdevelopment in the country, while challenging politicians at the burial to move the country forward.

“Go to hospitals and schools and see what Nigeria is like,” the cleric quipped. “I encourage you to go to the Federal Medical Centre (FMC) here in Owo to campaign and see what the future holds.”

“The poor are getting poorer.

“Nigeria needs a change that will ensure safety and security in villages.

“We need a government that understands the economy. Life is hard. Let our leaders be careful to help us move forward. The best place to start a campaign is the hospital,” the preacher emphasised.

Nigerians are facing gripping difficulties as the country prepares for another general election in February and March next year.

The APC government under President Muhammadu Buhari will be completing an eight-year rule at the centre and is pushing to keep power beyond 2023 through Mr Tinubu.

Analysts, however, say the performance of the ruling party has been poor on all important development indices since gaining power in 2015.

Economy has worsened under Mr Buhari with the country twice falling into recession, the latest in 2020. Unemployment rate remains prohibitive while the country’s currency, naira, continues to lose value against the dollar at an alarming rate due to lack of Forex revenue.

Insecurity has also assumed a frightening dimension. Insurgents and bandits have taken over large swaths of the country, especially in the North. The criminals have remained daring in their attacks, recently bombing a federal prison in the nation’s capital to free their cohorts. The presidential entourage has also twice been attacked this year.

Kidnappers are giving many road travellers and villagers around the country nightmares with incessant abductions for huge ransom and sometimes death, in the case of default.