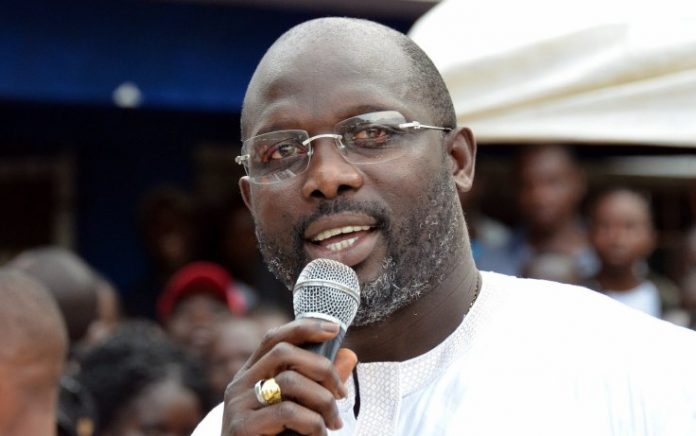 The National Election Commission data shared late Thursday show Weah ahead in 14 of Liberia’s 15 counties while Vice President Joseph Boakai leads in his home county, Lofa. With 20 candidates in the race, observers expect a runoff election.

Commission Chairman Jerome Korkoya warned that the early results represent a small portion of the total vote, and he cautioned candidates’ supporters against declaring victory.

Liberia seeks a successor to Ellen Johnson Sirleaf, who led the country as it recovered from civil war and the Ebola outbreak that killed nearly 5,000 Liberians.

One of the largest political parties called for a halt to vote-counting Thursday, alleging voting irregularities and fraud. Angry Liberty Party supporters claimed that polls opened late and that ballot-tampering occurred in at least one location in the capital, Monrovia.

“These people stood in the rain and under the sun. These people sacrificed,” the party’s vice chairman for political affairs, Abe Darius Dillon, told The Associated Press. The Liberty Party’s candidate is Charles Brumskine, a corporate lawyer who placed third in 2005 elections and fourth in 2011.

The election commission is ready to listen to official complaints but the vote-counting will continue, spokesman Henry Boyd Flomo said.

“The constitution mandated us to conduct elections and declare results therefore in 15 days,” Flomo said. “We’ve got no option but to live with that.”

He said he could not address the accusation of ballot-tampering but acknowledged that many voters found it difficult to find their voting station. Everyone was allowed to vote, he added.

The Carter Center, which observed elections, commended Liberians “for the calm and peaceful atmosphere” of the vote. It noted difficulties with long lines and management of voter lists but said it could not give a final assessment until vote counting is complete.

“No matter the outcome of this election, it will result in a transfer of power from one democratically elected government to another for the first time in the lives of many Liberians,” it said in a statement.