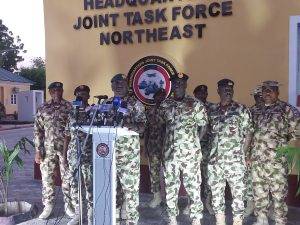 Troops of Operation Hadin Kai (OPHK) claimed at the weekend to have neutralized 49 Boko Haram and the Islamic State West Africa Province (ISWAP) terrorists in the Bama-Mandara-Damasak axis of Borno state.

This is even as two Chibok girls were also rescued along with two babies.

The alleged killing were made in joint patrols and ambushes against the terrorists in the last six weeks of counter-insurgency operations in Sambisa Forest and the Lake Chad region.

Reviewing the joint military operations in Maiduguri, the Theatre Commander, Maj-Gen. Christopher Musa, disclosed: “Our ultimate desire in the joint counter-insurgency operations was to restore peace in the northeast region by 2022.”

He noted that with the commencement of the dry season, there are challenges to be overcome to end the 13-year war that claimed many lives and property.

According to him, the difficult terrains of insurgents’ hideouts including the dry season, however; fuel terrorism in Borno, Adamawa and Yobe states.

“We however, lost nine soldiers, while 20 others were injured in the six-week counter-terrorism operations,” he said, stating that two each of the Civilian JTF were also killed and injured,”he said.

The spokesman added that two Chibok girls were rescued along with two babies.

“There are 11 Chibok girls rescued in the 2022 joint operations,” he said, lamenting that 96 abducted school girls were still in custody of terrorists.

Other Army operations conducted during the period under review, according to him, comprise the rescue of 99 women and children.

On terrorists’ continuous surrenders, he said: “The total number of surrendered terrorists along with their families stood at 81, 131,” noting that with their increased surrender to Army, another camp has been established to decongest the existing camps in Maiduguri metropolis.