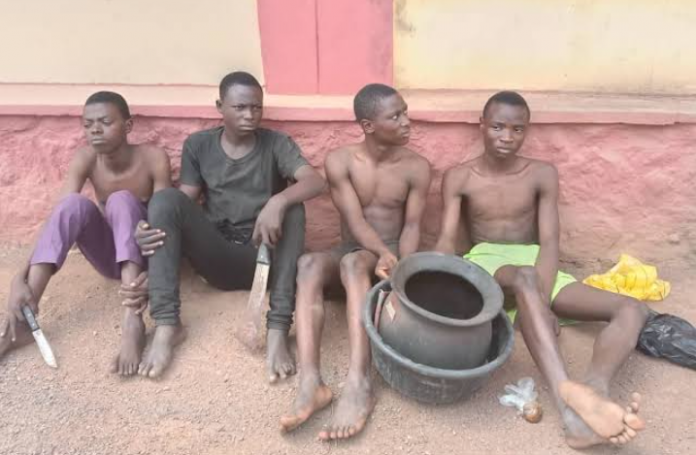 Majekodunmi Balogun, 20-year-old self-confessed killer of Sofiat Kehinde, an 18-year-old girl, says he got tips on money rituals in a Facebook group.

Four suspects, including three teenagers were arrested for killing Sofiat on Saturday at Oke Aregba community, Abeokuta.The names of the other suspects are Wariz Oladeinde (17) Lukman Gafar (19) and Solio Majekodunmi (18) the boyfriend of the deceased.

The police command in Ogun said it received reports from community heads that the suspects were seen burning a human head in a pot. The development stirred reactions and elicited debate on the unreasonable quest for money in society.On Monday, the four suspects were paraded at the state police headquarters in Abeokuta.Speaking to journalists, Balogun said the deceased was his former girlfriend and that he broke up with her because she was “not a good girl”.

The suspect said he gave the deceased’s phone number to Majekodunmi who asked for it in December 2021.He said the deceased and Majekodunmi began dating afterwards, adding that they started planning to kill her and “use her for money rituals” about two weeks ago.Asked how they learnt about money rituals, Balogun said he screenshot a Facebook post published in a group highlighting steps on how to do money rituals.

“I was dating one girl called Sofiat last year but we are no longer dating. Her older siblings know me but her mother doesn’t,” he said in Yoruba language.“I told my friend (Majekodunmi) that I was dating Sofiat and that we are no longer dating.“He (Majekodunmi) asked for her phone number so that he can propose to her for a date. I gave him the phone number so that he can also date her.“He called Sofiat, not in my presence though.

Later, he told me that Sofiat is at his place and that she has agreed to his proposal. This was last year and they both had sex.“Since two weeks ago, we have been planning to kill her for money rituals.

The 18-year-old confessed that he lured the girl to his Abeokuta residence and that they beheaded her after he had sex with her.On his part, Abimbola Oyeyemi, Ogun police spokesperson, said bad parenting should be blamed for the incident, while asking religious leaders to stop preaching prosperity.“This can only be described as a superlative degree of callousness.

It is despicable and barbaric at this time for somebody to still have it in mind that money can be made if he sacrifices the life of a fellow human being,” he said.

“More so, what is it that teenagers want to use money for that will lead them to this type of heinous crime? It is still beyond the comprehension of a normal human being.”