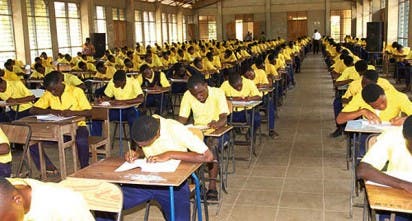 Parents and guardians in Rivers have decried what they described as widespread extortion of their wards sitting for the 2021 West African Senior Secondary Certificate Examination (WASSCE).

The West African Examination Council (WAEC) began this year’s exams on August 16. The exams are scheduled to end on September 30. As is the norm, supervisors were deployed across Nigeria to administer the papers as ad-hoc staff, But some parents and guardians lamented that WAEC officials deployed to oversee the conduct of the exams in some schools in Rivers were imposing mandatory fees on candidates.It was also alleged that some of the supervisors threatened to sabotage the exams if the payments were not made.

On average, most candidates in Nigeria will sit for nine papers during the 2021 WASSCE, with a couple of practicals to top it for subjects like Biology, Physics, and Chemistry, among others.As for the likes of English Language and Mathematics, sources who spoke on the issue said payment of about N3,500 was made per student while N1,500 and N2,000 were requested for practical tests and other subjects respectively.Based on this, if a student sits for a total of nine subjects and at least two practicals, they might have had to set aside about N24,000 for illegal payments so long as the fees were demanded during each of the papers.

If a school in Rivers had 120 WASSCE candidates for 2021, an estimated N2.9 million would have been paid.

A source who pleaded anonymity alleged that their sibling who sat for the exams at one Rich Model Secondary School in the Oyigbo LGA of Rivers state had to pay over N15,000 in what was termed “exam settlement” to supervisors.“It’s coming from supervisors sent to schools. They intimidate the students and the schools themselves. When they decline, they threaten that the results from the school might go missing,” the source said.

“They’ve been doing this since they started this exam. The one that got me angry was when they requested between N3,500 to N4,000 the day they wrote their English paper.“The supervisor said, ‘if you don’t pay, whatever comes next, you’ll have to accept it.’ I asked my sibling to tell them she had no interest in it but she said they were told it’s a mandatory fee.“It was when I reached out to the school and her colleagues that I learned there were some students who couldn’t participate in the ongoing exams due to their inability to keep up with the incessant levies.“I went to the school to speak to the principal but his response was that the supervisors threaten to sabotage their papers in the process of transporting them to the WAEC centres.

“Some dropped, not because they couldn’t pay WAEC fees but due to other kinds of extortion that come alongside.”

Another source who confirmed the trend said many schools in the state fail to confront the supervisors, leaving the WAEC ad-hoc staff to go unchallenged. This, the source added, was to avoid their candidates being victimised.“Most schools in Eleme, Oyigbo, Obi-Akpor LGA are involved. SSCE candidates are mandated to settle the WAEC supervisor in charge of the paper for the day,” he said, communicating via instant messaging.

“The pay varies depending on the paper written on that day and the amount the supervisor has decided to extort from the candidates. N3,500 was paid to the supervisor in charge the day English was written.“N2,000 was paid to the supervisor in charge on the day Chemistry practical was written. When you decline or decide not to pay, the supervisor would threaten the candidate that they won’t see their results or paper for that day.“It’s standard practice here; no one has been able to challenge them. Supervisors now act as a sort of mini-gods. Some of the schools equally ask for ‘Assistance Fee’, another extortion before students are allowed to sit exams.“Some guardians withdrew their wards from participating in WAEC/SSCE exam not because they can’t afford to register and pay for the standard WAEC but because they can’t afford the extortion.”

Suleiman Kum, WAEC’s zonal coordinator in Rivers, said the exam body had been receiving reports of irregularities.“We only sent them to conduct exams, during which the respective principals should be in their respective schools. You shouldn’t be a principal and someone from outside would come to collect money from your candidates,” he said.“For what? Candidates paid for the exam and we’re only asking them to administer it. We paid supervisors transport allowance and a fee for the job. I’ve been receiving some reports about irregularities in some schools.“And we send our officials to investigate.

Some schools even asked students to pay for the calculators and other accessories we gave out. Those items are free. A parent called, saying they billed students N3000.“I asked my staff to go there, one Army International School. From the beginning, they should draw our attention to these, not keep quiet till exams are almost over. We’re really not happy that supervisors go about doing such things.”On his part, Demianus Ojijeogu, WAEC’s national PRO in Nigeria, vowed that the exam body would punish erring ad-hoc staff.“When a candidate registers for WASSCE; pays the standard fee and this payment is remitted to WAEC, there is no other fee to be charged. These supervisors and the schools are not billing the students on our behalf,” he added.“A Kobo from these monies don’t get to WAEC. We’re not aware of these.

We neither condone it nor ever be a party to such a scheme that exploits children. They are doing this on their own and soiling the name of WAEC.“Most of them are teachers nominated by their principals and endorsed by the state ministry of education. They are not actually WAEC staff but there’s a good sum WAEC pays daily. I think it’s for them to encourage malpractice.“We’re compiling the names of supervisors that infringed on the rules. They will be punished and blacklisted.”As of when this report was filed, neither the schools nor the state ministry of education was available for comments.