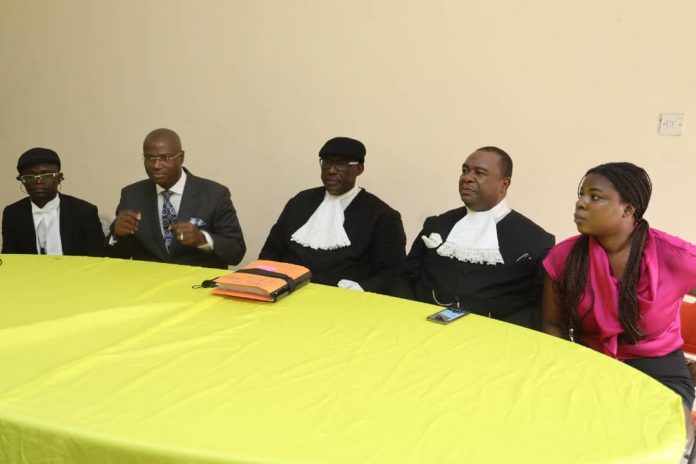 Frontline lawyer and Founding Partner of the Abuja-based law firm of J-K Gadzama LLP, Chief Joe-Kyari Gadzama, SAN was in Lagos recently to fraternize with the legal and media confraternity in that axis. In particular, the learned silk was in Lagos to attend a valedictory Court session in honour of the retiring Justice S.B.A Candide-Johnson of the Lagos State Judiciary, after attending the NBA Ikorodu Bar Dinner where he was honoured by that branch.

After the valedictory court session in Ikeja, he was cornered by media practitioners to an interactive session at the NBA Ikeja Bar Centre where he shared his views on sundry national issues.

The media event, which was held at the secretariat of the Ikeja Branch of the Association on Friday, July 2, 2021, was graced by law reporters, correspondents and editors from the nation’s leading outlets, as well as friends and well-wishers of Chief Gadzama’s – among them two brother SANs.

NEWSWIRE Law & Events Magazine’s correspondent at the event reports that proceedings began with brief introductory remarks by members of the learned silk’s entourage in which they extolled his many virtues and combination of attributes (which, they said, are founded on his staunch Christian faith and moral convictions) as well as his interventions in the affairs of both the NBA and the society in general. One of those interventions, it will be recalled, led to his becoming the pioneer chairman of the NBA’s Section on Public Interest and Development Law (SPIDEL).

A two-time presidential aspirant of the NBA, Chief Gadzama runs a highly successful and influential firm of lawyers which has represented and advised a vast number of big-ticket clients in some of the most intricate and consequential transactions across a diversity of practice areas and in key sectors of the Nigerian and global economy. Behind the façade of the renowned legal juggernaut, his associates said, lies one of the friendliest and most accessible men alive, who combines his passion for the state of the Bar and the society with his love for the game of golf.

Despite not being declared winner on either of his presidential runs, the consensus opinion is that the learned silk has remained consistent in promoting the cause of justice, the legal profession and its practitioners – particularly junior wigs – through his famous Hon. Justice C A Oputa (JSC) Mentoring and Training Program for Young Lawyers, which had been sustained for about a decade now.

In his remarks, Chief Gadzama, SAN, began by praising the role of the Nigerian media in influencing perceptions and even outcomes in various areas of national discourse – including the legal profession and its evolution and trajectory in Nigeria. He also praised his own association with the press, which has grown in intimacy and mutual regard over the years. This present gathering, he added, was not just to win new friends in the media, but to renew his covenant with old and long-standing ones.

Gadzama also addressed certain key issues with which his name has been associated in recent weeks. One was his role in a law suit at the Supreme Court, which has been the subject of much commentary especially on social media.
He not only gave an overview of the facts of the case, complete with relevant documents to support his position, but also implored the media to report only the truth – not necessarily to hold brief for him in respect of the allegations that have trailed his involvement, but simply to put things in their proper perspective – regardless of whose ox is gored.

NEWSWIRE correspondent also reports that the question-and-answer session which followed Chief Gadzama’s remarks was an animated affair as reporters took the senior advocate to task on a number of issues, beginning with the Supreme Court suit in question, but also including other matters of concern to the legal profession and the society in general.