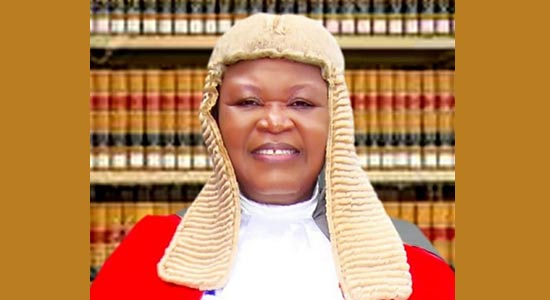 A political party, Action People Party (APP) has written a petition to the National Judicial Council, NJC, over the unlawful appointment of Justice T.E. Chikeka, as the Acting Chief Judge of Imo state.

The party in the petition dated December 6, 2021 called for the suspension and discipline of Justice Chikeka for presenting himself for appointment as the CJ of the state without due process.

In the petition signed by the National Chairman of the party, Mr Uchenna Nnadi, the party said in appointing a new CJ, the Executive Governor of Imo state, Chief Hope Uzodimma, jettisoned judicial hierarchy and appointed Justice Chikeka, who is the number three judge in the state as CJ.

The party chairman said in the petition, ”As you are aware, the Honourable Justice I. O. Agugua, being the most senior judicial officer, was lawfully appointed as the Acting Chief Judge of Imo State on March, 2020. Her appointment in that capacity followed the due process of law regarding the appointment of judicial officers.

This means that Honourable Justice T. E. Chikeka, who has now being appointed as the Acting Chief Judge of Imo State is not the most senior judicial officer in the State and therefore does not come close to the occupation of such office in the event of any vacancy, which does not exist in the present circumstances.

”We also wish to place on record that Honourable Justice T. E. Chikeka, is fully aware of the constitutional provisions relating to appointment of Acting Chief Judges of High Court of States and the Code of Conduct for Judicial Officers. but nevertheless connived with the Imo State Governor and illicitly presented herself to be swom-in as the Acting Chief Judge of the State.

He said the disturbing question which has damaged the sacred image of the judiciary is: why would the Honourable Justice T. E. Chikeka quickly present herself to be sworn-in as the Acting Chief Judge of Imo State in obvious connivance with politicians and in deliberate desecration of the deepest soul of the institution of judiciary?

He further said, ”In the exercise of your disciplinary powers, we demand you to urgently suspend, discipline and recommend the immediate retirement of the Honourable Justice T. E. Chikeka forthwith.

”In the unlikely event that our demands are met, we may be constrained to seek redress in court by way of mandamus to compel the National Judicial Council to perform its statutory duty in the circumstances.”