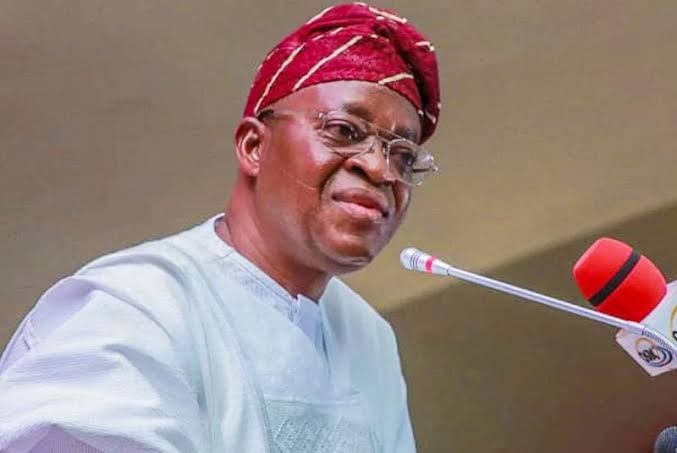 Former Governor Gboyega Oyetola has attributed the looting of the Osun Government House to “unknown men.”

Mr Oyetola said it was not his intention to imperil his successor, incumbent Governor Ademola Adeleke’s new administration.

Funke Egbemode, the ex-information commissioner under Mr Oyetola, said “unknown men” were behind the looting, asserting it was “beyond laughable” to accuse “a man of Oyetola’s pedigree of taking away the Government House cooker.”

Ms Egbemode, in her statement, said relevant security outfits were duly informed of the looting perpetrated by “unknown men.”

“It is also important to note here that the state commandant of the Nigerian Security and Civil Defence Corps, NSCDC, was officially informed of the looting of the official residence of Deputy Governor Gboyega Alabi and other quarters within the Government House by ‘unknown men’,” asserted Ms Egbemode in her statement.

“In a letter with reference number SEC 43T/352, dated November 25, 2022, and signed by A.T. Komolafe on behalf of the coordinating director, Governor’s Office, the NSCDC was notified of the ongoing looting of government properties in different quarters following the then-Governor Adegboyega Oyetola’s departure from the premises,” she explained. “Mr Komolafe, in the letter, asked for armed security to stop the looting in the Government House of Okefia GRA.”

For the matter to have been officially reported to the NSCDC, Ms Egbemode said the newly sworn Adeleke administration must be “confused” to still level allegations of looting against his predecessor.

“So, how exactly is Mr Oyetola guilty of this looting by ‘unknown men’ after he had vacated Government House? The apparent confusion of this new government keeps deepening with every new step it takes,” the ex-commissioner said.

She explained that “if, as claimed, it has established a review committee for stock-taking, why is it launching a media trial to force its pre-conceived conclusions down the public’s throat?”

However, Mr Adeleke’s spokesman Olawale Rasheed said the new governor had a duty to report what he met on the ground since the “Oyetola administration refused to conduct proper handing over.”

Commending the ex-commissioner for confirming there was indeed looting of the Government House, Mr Rasheed cautioned her not to “attack the new administration that is cleaning up the mess created by her former boss.”