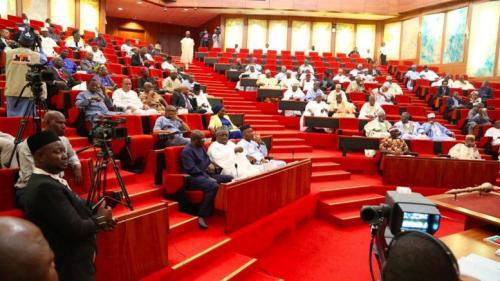 The Senate was yesterday treated to some shocking revelations of missing figures in the nation’s revenue generating system. In specific terms, various revenue generating agencies of the federal government allegedly shortchanged the nation to the tune of N1.7trillion through under-remittances of revenues generated between 2012 and 2016. Worst still, the nation’s cash cow- Nigerian National Petroleum Corporation (NNPC), ran at a deficit of N3.1trillion during the period under review.

The N1.695, 585, 887, 406 reportedly lost by the federal government during the stated period was part of a total sum of N21.5 trillion generated by 93 agencies covered. Facts to these eff ect are contained in the reports of the Ad-hoc committee on alleged misuse, under remittance, and other fraudulent activities in collection, accounting, remittance and expenditure of Internally Generated Revenue by the revenue generating agencies set up by the Senate in November last year.

In the 32 – page report laid before the Senate last week and billed for consideration this week, 25 out of the entire 93 revenue generating agencies covered were alleged to have defrauded the federal government to the tune of N1.7 trillion.

According to the report, during the period under review, the Nigerian Customs Service which generated N335.855 billion failed to remit N83.963 billion as 25% of the amount generated in line with the provisions of the Fiscal Responsibility Act 2007. Similar negative report was made on the Federal Inland Revenue Service, which the committee said generated N455.5 billion, but had under-remittance of N33.83billion. Also included is the Nigerian Ports Authority which recorded yet another under-remittance of N86.636 billion into the Consolidated Revenue Fund (CRF) despite generating N789.104 billion. Others are the Central Bank of Nigeria with N13.716 under-remittance out of N3.098 trillion generated; Nigeria Maritime Administration and Safety Agency with N184.489 billion under-remittance out of the N301.160 billion generated; and Nigeria Television Authority which also recorded N5.567 billion as under-remittance out of the N56.817 billion generated among others. For the NNPC, the committee in the report stated that while the nation’s cash cow during the period under review, generated N15.541 trillion, its entire expenditure during the period was N18.657 trillion exceeding the corporation’s revenue profile by N3.115 trillion.

The committee observed that Revenue Generating Agencies chose to comply with a directive via a memo dated November 11, 2011 Ref. No. BO/ RVE/12235/259/VII/201 by the former Minister of Finance, 1) “Ngozi Okonjo Iweala to remit 25% only from the revenue generated and use the remaining 75% as part of its expenditure which is a clear violation of section 1200) of the 1999 Constitution of the Federal Republic of Nigeria (as amended), and also a violation of the Fiscal Responsibility Act 2007 and the Establishment Acts of some of these institutions.

” Similarly, it asked “that the Fiscal Responsibility Act should be amended in a way to compel all agencies and institutions of government on compliances with financial regulations regarding income generation, accounting and remittances.” It also recommended “that the Senate should also amend .the laws where necessary, to make it mandatory for all revenue generating agencies to accommodate resident treasury officers to be posted by the Accountant General of the Federation that will have access to all financial records and books.

“That the National Assembly should direct the immediate stoppage of the implementation of the contents of the memo by the former Minister of Finance and agencies and institutions should adopt the new mode of remittances as approved by the Senate.

“That the Fiscal Responsibility Act (2007) should further be amended to make all Revenue Generating Agencies to pay 30% of their income generated monthly to the Consolidated Revenue Account before any expenditure etc.