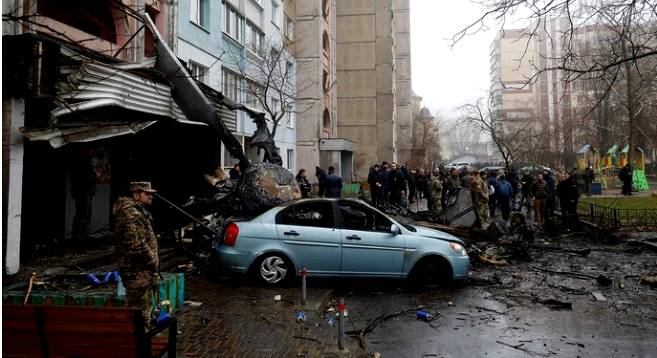 Ukrainian Interior Minister, Denys Monastyrskyi, his deputy Yevhen Yenin and State Secretary of the Ministry of Internal Affairs Yurii Lubkovych have died in an helicopter crash near the country’s capital, Kyiv on Wednesday.

According to Ukrainian authorities, the total number of deaths are 18 including the country’s government officials and three children.

This was made known by Ihor Klymenko, chief of Ukraine’s National Police as published in the local media.

An emergency services helicopter crashed in Brovary, an eastern suburb of the Ukrainian capital. Nine people who died were aboard the helicopter.

Monastyrskyi was the most senior Ukrainian official to die since the war with Russia began last February.

It still remains unclear at this time if the crash was an accident or connected to the ongoing war with Russia. No fighting has been reported in the Kyiv area as of late.

Kuleba also disclosed that 29 people were injured in the crash, including 15 children.

Ukraine’s first lady Olena Zelenska was seen with teary eyes as she pinched her nose in emotion just before attending a World Economic Forum session in Davos, Switzerland.