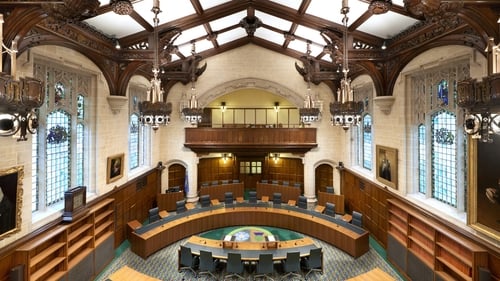 The Supreme Court has ruled that protests can be a “lawful excuse” to block roads, as the government pushes for new laws to limit peaceful demonstrations.

Britain’s most senior judges said it was right to acquit a group of protesters who blockaded the Defence and Security Equipment International (DSEI) arms fair in London in 2017.

A ruling given on Friday morning said that protesters can have a “lawful excuse” defence against the offence of obstructing a highway, even where they have used “deliberately physically obstructive conduct”.

“There should be a certain degree of tolerance to disruption to ordinary life, including disruption of traffic, caused by the exercise of the right to freedom of expression or freedom of peaceful assembly,” the majority ruling added.

“There must be an assessment of the facts in each individual case to determine whether the interference with article 10 or article 11 rights was ‘necessary in a democratic society’.”

The offence has been used against hundreds of protesters in recent years, and the trial of Extinction Rebellion activists who blockaded a Rupert Murdoch-owned printworks had been adjourned pending the Supreme Court’s ruling.

The case was sparked by the prosecution of four anti-arms trade protesters who blocked a road leading to the ExCel Centre while it hosted the DSEI arms fair in September 2017.

After hearing the defendants’ argument that the event involved the “sale of potentially unlawful items designed for torture or unlawful restraint, or the sale of weaponry to regimes that were then using them against civilian populations”, district judge Angus Hamilton found they had a “lawful excuse” for obstructing a highway and acquitted them of all charges.

The Crown Prosecution Service (CPS) appealed to the High Court, which overturned the judge’s findings in January 2019, finding he had erred in his assessment of proportionality and “took into account certain considerations which were irrelevant”.

The protesters appealed to the Supreme Court, which said the original judge had not made an error and restored the dismissal of the charges.

The ruling said that the DSEI protest had not provoked disorder or seen clashes with police, and had taken place “on an approach road in a commercial area where there was already a sizeable police presence”.

Judges said that when interfering with the right to protest, factors must be considered including the extent to which demonstrators have broken the law, their location, the duration of the protest, its interference with the rights of others and whether the action is over “very important issues”.

Andrew Smith, of Campaign Against Arms Trade, said the judgment had set a “vital precedent” but should not have been needed.

“There should never have been a four-year long legal process with all of the time it has taken and the stress that it will have brought,” he added.

“It was yet another case of totally inappropriate policing and overreach against protesters.

“It is an important verdict, especially now, when the government is trying to crackdown even further on the right to protest. If the current proposals become law, they will give even more powers to the police, while making it even harder for people to make their voices heard.”

Lawyer Raj Chada, a partner at Hodge Jones and Allen who represented the appellants, said the judgment would have a “significant effect” on future cases.

He said it meant there could be “many more arguments to pursue” on behalf of prosecuted protesters, adding: “Even if the protest caused deliberate obstruction, it does not automatically mean the police are right to arrest. There has to be proper evaluation of all the circumstances.”

A spokesperson for Extinction Rebellion said: “This judgment shows how far out of step the government is with its attempt to further criminalise peaceful protest through the new policing bill.

“Such protest, which aims to draw attention to climate and ecological villains including those in our own government, is absolutely the right thing to do, not just morally but in law.”

The ruling came as opposition mounts to controversial protest laws contained in the Police, Crime, Sentencing and Courts Bill.

Parliament’s Joint Committee on Human Rights said earlier this week that proposals to allow police to restrict protests on the basis of noise were “not necessary in a democratic society” and must be scrapped.

The law would also give the home secretary the power to define “serious disruption”, allow police to ban one-person protests and increase prison sentences for non-violent crimes related to demonstrations.

It has sparked a wave of demonstrations, including some that resulted in vandalism and violence against police officers, amid accusations that the government was stifling the right to protest.

In March, a report by HM Inspectorate of Constabulary that was commissioned by Priti Patel found police had been “tipping the balance too readily in favour of protesters”, and against disrupted businesses and members of the public.