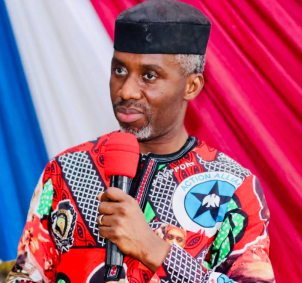 Uche Nwosu, former governorship candidate of Action Alliance (AA) in Imo state, has been arrested by the police operatives.

A statement issued by Michael Abattam, spokesperson of the Imo police command, said Nwosu was not abducted and is presently in police detention.“This is to inform the general public that chief Uche Nwosu was not kidnapped but was arrested by the police and Imo state police command is aware of the arrest, and presently he is in police custody,” the statement reads.“This is to refute the earlier news that has been making rounds on social media that he was kidnapped by unknown persons/gunmen.

The Police Commissioner in the state used the medium to assure Imolites of the Command’s commitment in ensuring the safety of lives and properties in the state this festive season.”Nwosu was arrested on Sunday during a church thanksgiving service at St. Peter’s Anglican Church, Umunwokwe Village Eziama-Obaire Nkwerre LGA had prompted controversies.The church thanksgiving service was in honour of his late mother Jemaimah Nwosu, who was laid to rest last Wednesday.

He is the son-in-law of Rochas Okorocha, a senator and former governor of Imo.Earlier on Sunday, gunmen had abducted Charles Mato, the Sum Pyem and paramount ruler of Gindri in Mangu LGA of Plateau.Ishaku Takwa, media officer of operation safe haven (OPSH), the military task force maintaining peace in the state, sad the traditional ruler was abducted at his residence.He said troops of the task force had been mobilised to the area to conduct search and rescue operations.