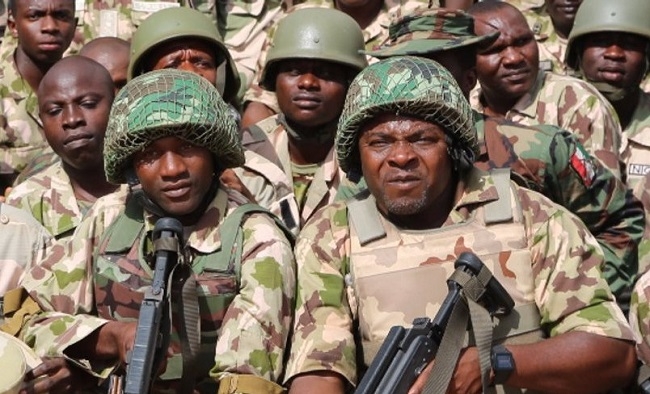 The Defence Headquarters says the military has eliminated more than 50 terrorists and rescued 50 victims in land and air offensives in North East and North West in the last two weeks.

The Director, Defence Media Operations, Maj.-Gen. Musa Danmadami, made this known at a bi-weekly news briefing on the operations of the armed forces on Thursday in Abuja.

In the North East, Danmadami said the troops of Operation Hadin Kai neutralised 13 terrorists, apprehended 10 and rescued 41 victims in land operations across the theatre during the period.

He also said that more than 13 terrorists were eliminated in air bombardments at Belowa and Ngwuri Gana in Abadan and Bama Local Government Area of Borno on Nov. 4 and Nov. 5.

He said that feedback from the airstrikes revealed that key members of Islamic State of West Africa Province (ISWAP) in Shura Council, Mallam Ali Kwaya and Mallam Bukar Mainoka were among those neutralised.

According to him, the airstrikes targeted two ISWAP terrorists vehicles observed to be conveying about 13 injured terrorists that survived the initial strike to another hideout.

“At Ngwuri Gana in Bama, the convergence of a large group of ISWAP insurgents in 15 trucks who were armed with assorted weapons, arriving from different locations to attack an unspecified location within the general area was bombarded.

“Feedback revealed that scores of the terrorists were neutralised, and all their structures and vehicles engulfed in fire,” he said.

Danmadami revealed that a total of 250 Boko Haram/ISWAP members and their families comprising of 43 adult males, 80 adult females and 121 children surrendered to the troops at different locations within the theatre.

He said that about N13.8 million, various categories of arms and ammunitions as well as logistics supplies were captured from the terrorists and their collaborators during the period.

According to him, troops rescued a family of 29 which comprised two adult male, 15 adult females and 12 children from terrorists during the period.

In North West, Danmadami said the troops of Operation Hadarin Daji, had on Nov. 9, tracked and apprehended two suspected gun runners at Kude town in Chikun Local Government Area of Kaduna State with 400 rounds of 7.62mm special ammunition in a truck and the sum of N1 million.

He said the troops also apprehended a suspected terrorists’ logistic supplier with the sum of N1.5 million with list of items meant to be purchased in his possession at airport roundabout in Igabi Local Government Area of Kaduna state.

According to him, troops neutralised 16 terrorists, recovered 13 AK47 rifles, 107 rounds of 7.62mm special, five  hand grenades, 75 motorcycles, and 150 rustled cattle among other items, while 19 civilians were also rescued.

He added that the air component of the operations  had on Nov. 14, bombarded a notorious terrorists kingpin, Alhaji Ganai’s enclave at Kidandan forest in Giwa Local Government Area of Kaduna State.

“This followed  intelligence report on the activities of Alhaji Ganai and member of his terrorist gang within the general area of operation.

“Subsequently, the location was engaged and bombarded. The aftermath of the strike revealed that many terrorists were neutralised including Yellow Kano and seven other notorious terrorists,” he said.