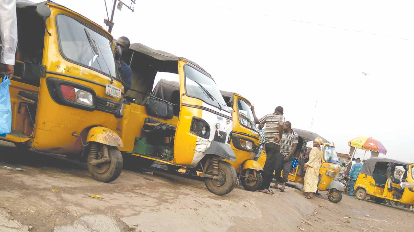 Akure—A 35-year-old tricycle operator, Adebayo Titus, was, weekend, beaten to death by his colleague, Akintelure Festus, over a minor argument, in Oke-Aro area of Ondo State.

It was gathered that the tricycle operators in the community met and agreed that the potholes on the roads be filled to make it passable by their tricycles.

But, reports had it that on the day scheduled for the exercise, the deceased refused to join others to fix the potholes.

An argument reportedly ensued between the deceased and the suspects that degenerated into fierce fisticuffs.

The deceased was reportedly hit severely and he collapsed before being rushed to a nearby hospital on Saturday where he died the following day.

Odunlami said that the duo engaged in a fight and in the process, the deceased was hit and collapsed.“She added that “the man was rushed by people around the vicinity of the fight.

The victim collapsed as a result of the fight on Saturday and was confirmed dead early Sunday morning at the hospital.

The case was reported at our ‘B’ Division area Headquarters in Akure.“Odunlami said that the suspect would soon be charged to court.