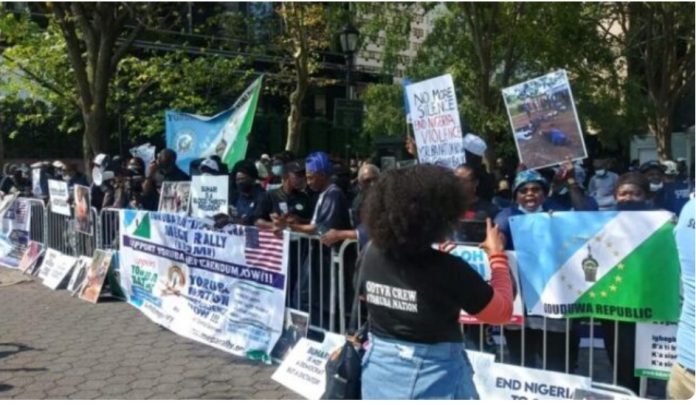 Garba Shehu, senior special assistant to the president on media and publicity, has criticised Yoruba nation agitators and the Indigenous People of Biafra (IPOB) for protesting at the United Nations.

The self-determination groups had protested in New York, US, during the 76th general assembly of the UN.The presidential spokesman described the protest as “tribal bullying of government officials” in an article titled ‘My takeaways from the 76th UN general assembly session’.He said: “While President Buhari was focusing on the problems plaguing the nation and in some instances asking for international support to deal with such, a coalition of groups protested outside the UN building.

“This happens with all countries- the United States, UK, India, Iran, China, Egypt- about everyone and about every conceivable issue but most especially climate change, gender and animal rights among others“There are some from the so-called “Yoruba nation” group and the so-called “Indigenous People of Biafra” (IPOB) terrorist group who worked together to protest outside the United Nations building in New York.“They sought to claim astonishingly that, somehow, they have earned rights through violence, murder of law enforcement agents and the innocent, and extortion to run their own affairs.

“Many Nigerians at home were disconcerted by the tribal bullying of government officials as they moved to carry out their diligent work between the Nigerian Mission in New York and the UN building, a walkable distance of less than 400 meters.“Protests are allowed by all who had anything to say. Tribal bullying is uncivilised. So is any effort to strengthen insurgency in the country.”Shehu praised the pro-Buhari protesters for “the maturity and decorum with which they carried on” during their solidarity march.He criticised the Yoruba nation agitators for associating with IPOB, saying they are “demonstrating there is little difference in their beliefs or their intent”.