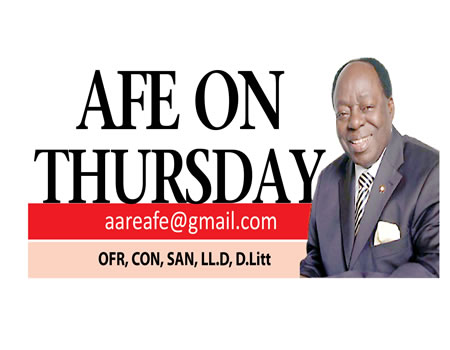 THE advent of the COVID 19 pandemic and its ghoulish consequences on the economic, religious, and socio- political structures of many countries around the world was the focal point of the world media over the past 24 months With variants including Delta, Alpha, Garma, and Beta, it is apparent that the world will usher in a new year 2022 together with a new variant of the virus, Omicron.

According to CNN, for instance, the Canadian Health Minister announced that “any non-Canadian who has been in South Africa, Mozambique, Namibia, Zimbabwe, Botswana, Lesotho and/or Eswatini from November 12 onward will be barred from entering the country Canadian citizens or permanent residents who have been to one of those countries will still be allowed to come home, but with strict rules: they must have a negative PCR test to board their flight to Canada, must take another virus test upon arrival, quarantine at a hotel until they have a confirmed negative test result, and then quarantine at their residence for another 141 days Other countries have varying degrees of restrictions, travel requirements and blacklisted countries.

It would seem that the international travel restriction which has generated the most public outcry, especially from sub-Saharan Africa, is the travel ban imposed on Nigeria by the United Kingdom, taking effect from 4am on 6th December 2021. This implies, therefore, that Nigerians who do not have UK citizenship or residence permit can no longer travel into the UK until the restriction is eased. It does not matter whether they are fully vaccinated or not.

Justifying Nigeria’s inclusion in the “red list”, the UK Health Secretary openly declared that “over the recent days we have learned of a significant number of growing cases linked to travel with Nigeria. There are 27 cases already in England and that’s growing, and Nigeria now is second only to South Africa in terms of linked cases to Omicron”.

The news of the travel ban of Nigerians from entering the United Kingdom degenerated into a media frenzy, with many describing the move by the UK authorities as health apartheid’ and ‘discriminatory Equally in reaction, the Nigerian Minister of Information stated that the travel ban was not driven by science and as being ‘unjust, unfair, punitive, Indefensible and discriminatory Perhaps, in reaction to this ban, the Federal Government of Nigeria has threatened to impose similar travel sanctions on the UK and some other countries.

It is pertinent to examine the economic consequences of the regime of travel bans and counter bans and whether there will, in fact, be a loser at the end. As popularly stated, no nation is an island and over the years, countries have always maintained bilateral and multilateral relationships in almost every sphere of human endeavour. Prior to the breakout of COVID-19, countries such as the US, Australia, the UK, Japan, Cambodia, and Vietnam have profited from Chinese citizens’ hunger for tourism: Some of these economies now depend on the influx of Chinese visitors they receive, and a significant part of their GDP comes from Chinese tourism.

Some communities, such as the coastal province of KhanhHoa, have even been revitalized as a tourism-based economy focusing extensively on Chinese travels. According to the Chinese Jing Daily report, Spain has also seen a surge in tourism from mainland China, and the average per capita spending from Chinese tourists there in 2017 was $1,067. Chinese visitors were, in fact, the biggest spenders in the entire iberian peninsula, and according to the US.

Travel Association and ABC News, around 3 million Chinese visitors traveled to the US in 2018, spending an estimated average of $6,700 per person for each trip. This figure outpaces international tourists’ average spending by more than 50 percent.Tourism remains an important economic sector for most African countries, with the interest lying in the wide variety of points of interest, diversity, and multitudes of landscapes as well as the rich cultural heritage. Also, an ecotourist industry is present in some African countries including South Africa.

The Statistics Research Department, in its November 2021 report, stated that travel and tourism contributed 2.8 percent to Nigeria’s GDP in 2020, which was equal to 11 billion U.S. dollars.

In view of the travel bans imposed in reaction to the recent outbreak of the COVID-19 variant, there is bound to be dire economic consequences for all parties involved, with tourism being one of the most affected. sectors. Comparatively, it would seem that the European Community with several tourist destinations will bear an appreciable portion of the brunt of the international travel restrictions.

A chief economist, CarstenBrzeski, stated that this drop in tourism could add to a weakening of domestic demand, adding to existing problems stemming from the manufacturing sector, and in turn, delaying the timing of a rebound of the entire Eurozone economy to the second half of the year.” In addition, international companies have continued to bleed from the imposition of travel bans by the governments of their home countries.

Earlier in 2020, it was reported that Cathay Pacific Airways has asked its 27,000 employees to take three weeks of unpaid leave after announcing a 90-percent cut in flights to the mainland. And other major airlines and cruise lines are struggling as well. The Economist reports that shares in Air China, China Eastern Airlines, and China Southern Airlines have fallen by more. than 20 percent since the first person died from the coronavirus Back in Nigeria, with the recently announced UK travel restrictions, the President of the Lagos Chambers of Commerce and Industries, Dr. Michael Olawale-Cole, reportedly spoke on the economic impact of the ban as being felt by the British authorities as follows: “I spoke to a senior representative of the High Commission yesterday and he said one of the flights that left Nigeria had only about 16 people onboard while another one had 20.

That is unusual, but at a time like this, they are already feeling the impact. They are going to be badly affected with a prolonged ban There is no doubt that any prolonged travel restriction between the United Kingdom and Nigeria will bear negative consequences for both countries, at least in different sectors of their economies. Earlier in the year, the UK Trade Ministry sent a trade envoy to Nigeria to discuss the terms of ‘an absolutely huge trade deal which covers the tech, financial services, agriculture, and green technology sectors Nigeria is the UK’s 46th largest trading partner, currently accounting for 0.3% of total UK trade in 2020, according to the UK Department of International Trade.

Similarly, Nigeria is à commodity dependent, import-based economy and as such, relies heavily on the opening of its borders to the international community. This is clearly apparent in Nigeria’s refusal to close its international borders in the wake of the outbreak of the COVID-19 pandemic in early 2020. It therefore seems unjustifiable that any country, whether in Europe, Asia, or the Americas will place Nigeria on a ‘red list for the new variant particularly as there had been no more than six reported cases within a population of over two hundred million.

In conclusion, there is an urgent need to strike a balance between the need to maintain seamless bilateral relations and ensuring the protection of the citizens of a country from further outbreak. It is scarce to imagine that the UK authorities’ imposition of travel ban is well advised in view of the massive vaccination campaigns already in place in many of the African countries being red listed. The required balance between safety and economic relations is not always achieved by placing international travel restrictions but by having a holistic outlook towards the resolution of pressing concerns.

I can only hope that the concerned authorities will urgently fashion out a workable solution as both Nigeria and the United Kingdom stand a lot to lose if the rather-unwarranted restriction is unnecessarily protracted.

Save Your Liver Today! Here Is Everything You Should Know About Liver Problems