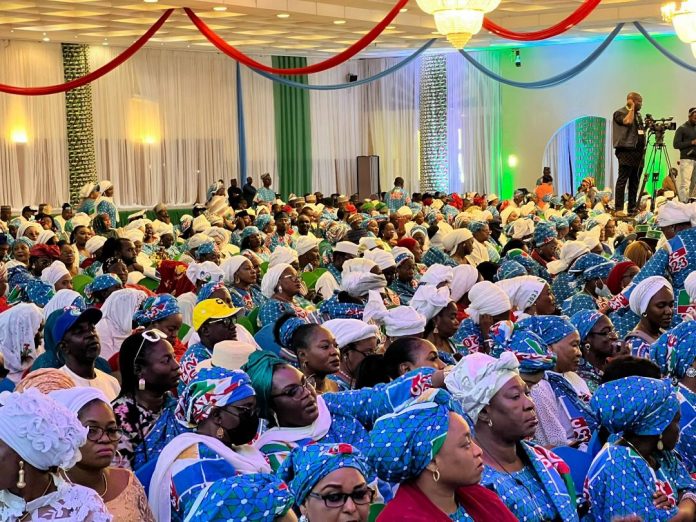 The Presidential candidate of the All Progressives Congress, Bola Ahmed Tinubu, on Monday arrived at the presidential villa with a delegation for the inauguration of the APC Women Wing Presidential campaign team.

In attendance at the event were his running mate, Senator Kashim Shettima; National Chairman of the party, Senator Abdullah Adamu; Governor of Plateau State and Director General of APC Presidential Campaign Council, Simon Lalong; Governor Abdullahi Ganduje of Kano State, among others.

A source at the party secretariat said that the inauguration of the 944-member team will signal the official kick-off of the party’s campaign.

The source also said the women’s team will enjoy a degree of autonomy to arrange and organise its own programmes at the national, zonal and state levels.

The campaign list, which contained names of 944 high-profile women and wives of prominent APC politicians, was released in the wee hours of Saturday by the campaign media admin, Rinsola Abiola, who is also the daughter of late Chief MKO Abiola.

In the category of zonal leaders, the wife of the Kebbi State governor, Dr Zainab Baugudu, will coordinate the NorthWest; the wife of Lagos State Governor, Dr Ibijoke Sanwo–Olu leads South West; the First Lady of Borno State, Falmata Zulum will be in charge of the North East.

Olufolake Abdulrazaq, the first lady of Kwara State, will coordinate efforts in the North-Central and Mrs Sanwo-Olu, wife of the Lagos State governor, will superintend over the South-West.

While Imo State First Lady, Chioma Ikeaka-Uzodinma, will organise the South-East campaign; her counterpart in Cross River, Linda Ayade, will oversee activities in the South-South.

In the 70-page campaign document, no fewer than 33 Nollywood and Kannywood actors were enlisted for entertainment.