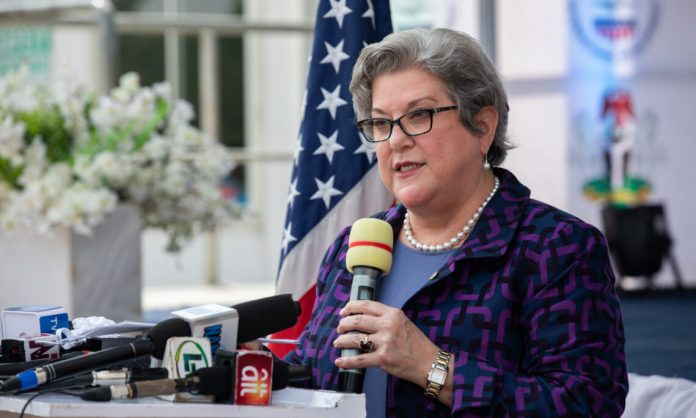 The United States says Nigeria cannot end up like Afghanistan.

Speaking with journalists in Abuja, on Monday, Mary Leonard, US ambassador to Nigeria, said the type of insecurity experienced in Afghanistan cannot happen in Nigeria.Nigeria is currently battling the Boko Haram insurgency, banditry and other forms of criminality which is worsening the security situation in the country.On August 15, Afghanistan fell to the Taliban, an Islamist group, after the insurgents seized several provinces and took over Kabul, the country’s capital.

This followed the withdrawal of the US troops from the country — marking the end of a 20-year-old war with the Taliban.After the capital city was captured, thousands ran to the airports in an attempt to leave the country — amid concerns that the Taliban’s resurgence will lead to the stifling of human rights.Amid concerns that what happened in Afghanistan could embolden the Boko Haram insurgents in the country, many Nigerians called on the federal government to take actions to forestall such plans.

Commenting on the incident, Leonard said what happened in Afghanistan will not be repeated in Nigeria as the situations are different.She said the US troops invaded Afghanistan in 2001 because of the killing of over 3,000 Americans.“I hear people making the analogy with Afghanistan a lot, it does not match up. When you listen to what President Biden said on how troops went to Afghanistan in the first place, it was because they were in a horrible tragedy, over 3,000 Americans were killed,” she said.“That is a different construct. The sovereign nations have had strong bilateral relations. I don’t actually think the two match up.”