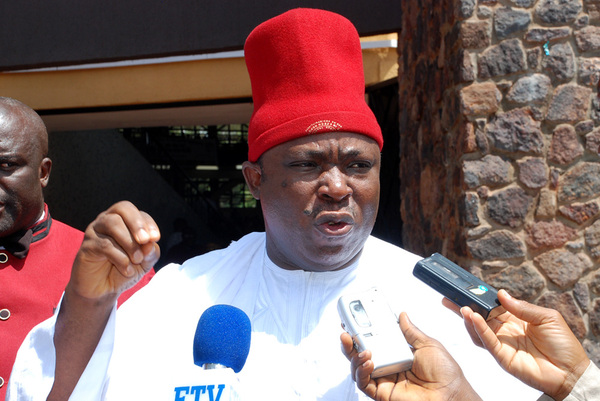 Umeh made comments on Sunday following Uba’s threat of challenging Soludo’s victory in court. Uba said his mandate given to him by the Anambra people was “stolen”. Soludo, governorship candidate of APGA, defeated Valentine Ozigbo, the Peoples Democratic Party (PDP) candidate, and Uba during the poll that was held on November 6.Speaking with journalists in Anambra, Umeh said the outcome of the election is a reflection of what the people wanted.

He said Anambra is not a Imo state where a fourth contender in an election became governor through the court.

“The election took place in all the 21 local government areas in the state and he didn’t win any council area, so what is he going to court for,” he said.

“The outcome of the election was a true reflection of what Anambra people want. The Anambra people didn’t give Andy Uba any mandate. They wanted Soludo, and they voted for him massively.

“We are used to such cases. I have been in Politics for more than 20-years now, so APGA is not afraid of going to Court with Andy Uba. Nothing will make Anambra people to vote for a party that has nothing to offer.

“Nigeria Judiciary is not an undertaker. Please tell him, we are waiting for him in the Court. Anambra is not Imo State, where a fourth candidate in election suddenly became a governor.”