Home Crime The fourth wife stabs her husband to death for impregnating new lover
Crime
May 21, 2021 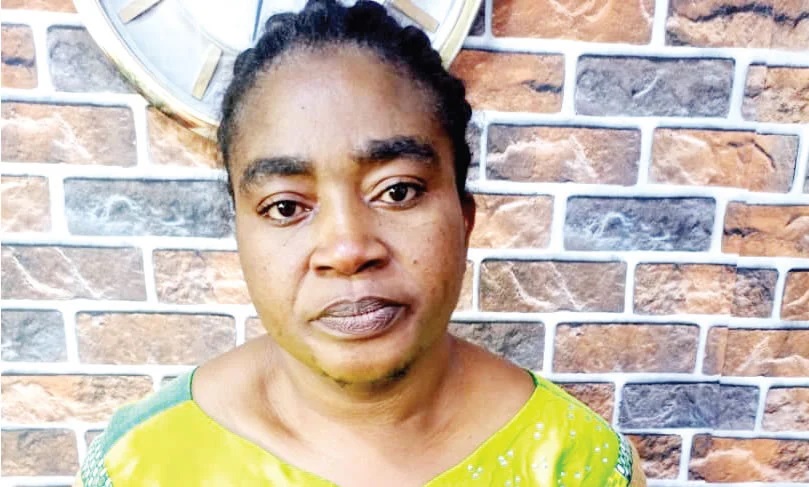 Men of the Ogun State Police Command have arrested a 47-year-old woman, Olanshile Nasirudeen, for allegedly stabbing her husband, Jimoh Nasirudeen, to death for impregnating another woman.

The incident happened on Wednesday in Ijebu-Ode during an argument between the woman and her late husband.

The suspect was the fourth wife of the deceased and worked in the same abattoir with him.

Oyeyemi noted that the woman stabbed her husband in the leg.
He explained that an argument ensued between the couple when the woman reportedly questioned her husband’s lover for getting pregnant for him.

The PPRO added, “She started questioning the woman about her audacity to get pregnant for her husband.

“This led to a hot argument between her and the deceased, as a result of which the suspect picked a knife and stabbed the deceased at the back joint of his left leg, thereby cutting one of his veins.

“He was quickly rushed to a nearby hospital for first aid, and later transferred to the Ijebu-Ode General Hospital, where he eventually gave up the ghost while receiving treatment due to excessive bleeding.

“Upon a distress call, the Obalende DPO, SP Murphy Salami, led his men to the scene, but the suspect had taken to flight before their arrival.

“She was subsequently traced and arrested in her hideout at the Mobalufon area of Ijebu-Ode.

“On interrogation, the suspect, who happened to be the fourth wife of the deceased, claimed that it was her husband who first slapped her simply because she asked his new wife her mission at her market stand.

“The corpse of the deceased has been released to the family for burial in accordance with Islamic rites after autopsy was conducted.”

In a related development, a barber, Dickson Edet, has allegedly caused the death of his 23-year-old girlfriend after an argument over infidelity.

The incident happened in Igbo-Etche, in the Etche Local Government Area of Rivers State.

A community source confirmed that the victim, Glory Odamni, was constantly assaulted by her boyfriend, adding that the suspect, in the past, had been arrested and reprimanded by security operatives for the act.

The source said during the latest assault on Tuesday, the victim fell while running into a nearby compound to escape the usual attack.

She was said to have lost consciousness as attempts to resuscitate her failed.

Our correspondent was told that she was rushed to a hospital, where doctors later confirmed her dead.

Angered by the development, some residents were said to have deposited Glory’s lifeless body at a plaza where her boyfriend worked as a barber on Igbo-Etche Road.

The deceased’s relatives later removed the body and deposited it in a mortuary.

Brother to the deceased, Sunny Odamni, said he was not aware that his sister was being assaulted by her boyfriend.

“I discovered that he used something to hit her on the head. She got internal bleeding. They rushed her to a hospital that evening on May 18. When they got there, the doctors tried to revive her, but there was no way.

“Nobody told me that such a thing was going on. That day was the first time I heard it and my sister did not complain to me that this was what had been happening. I need justice,” he said.

Our correspondent learnt that Glory had confronted the suspect with allegations of infidelity, which led to the argument.

After the incident, the suspect was handed over to the Elimgbu Police Station.

The state Commissioner of Police, Eboka Friday, said he had yet to get a report of the incident.