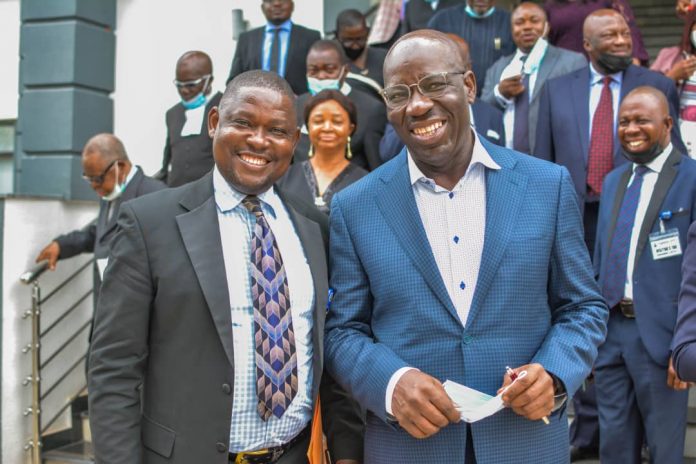 THE EXECUTIVE GOVERNOR OF EDO STATE FINALLY MEETS WITH THE LEADERSHIP OF THE NIGERIAN BAR ASSOCIATION OVER THE IMPLEMENTATION OF THE FINANCIAL AUTONOMY OF THE JUDICIARY.

It was a moment of relief, and positive development towards the implementation of Section 121(3) of the Constitution of the Federal Republic of Nigeria, 1999 (“1999 Constitution”) in Edo State, as the Executive Governor of Edo State HE, Governor Godwin Nogeghase Obaseki (“The Governor”) invited the Executive Members and elders (“The Delegation”) of all the branches of the Nigerian Bar Association (“NBA”) in Edo State to the Conference Room of the Edo State Government House.

The delegation of the NBA was led by the Chairman of the Benin Branch, Mr. Pius Oiwoh, just as Mr. J. O Aghimien, SAN led other elders of the Bar to pay a visit to the Executive Governor.

The Publicity Secretary of NBA, Benin, Mr. Ogaga Emoghwanre introduced members of the delegation after which Mr. Pius Oiwoh deferred to the learned Silk, Mr. J. O Aghimien, SAN to address the Governor on the reason for the visit.

The Learned Silk elucidated copiously on the reason for the visit. He stressed that it is in the interest of the state government, the betterment of democracy, the promotion of the rule of law, and the fundamental obedience of the grundnorm of the land for the administration to obey Section 121 (3) of the 1999 Constitution. The said section states clearly that all monies standing to the credit of the Judiciary in the consolidated revenue fund shall be paid directly to the head of courts.

The learned Silk went on to reiterate the point that the visit of the delegation is not a protest but to see to the promotion of the principle of separation of powers amongst the three arms of government and for each to run independently, as enshrined in the constitution.

In response, the Governor, referenced himself as one coming from a judicial background, and one who is Governor today simply because of the Judiciary. He continued by saying he wouldn’t be the Governor of Edo State today were it not for the Judiciary.

He further stated that the autonomy of the Judiciary is highly imperative and critical to him, and that it will not be in the interest of the Executive not to make the Judiciary autonomous. He stated further that as far as Edo State is concerned the provision of Section 121(3) is being implemented to the letter, just as is applicable to the legislature and the local governments.

The Governor stated that it is his personal conviction that every arm of government should be independent. It is for this reason the state pays directly to the head of court in EDO STATE.

Other members of the Bar like Dr. Osagie Obayuwana, Nosa Edo Osagie and Ede Asenoguan also lend their voices to that of the Delegation in support for financial autonomy for the Judiciary.

In closing, the Chairman of the branch thanked the Governor for the love and respect he extends to lawyers to the extent that principal members of his administration are members of the Benin Bar.

The meeting officially closed and later went into an interactive session. At the end of the interactive session it was unanimously agreed to the effect that a committee be set up comprising of: officials of the Executive, the Judiciary and the Bar to see to the effective and holistic implementation of the provision of Section 121(3) as alluded to by the Governor.