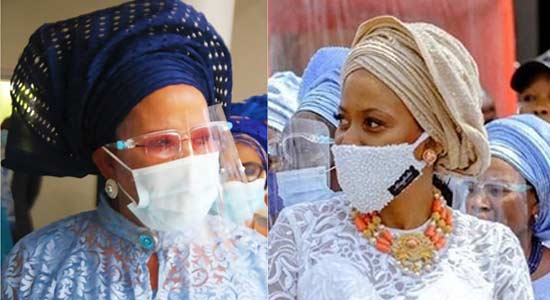 The battle over the estate of the late Lagos-based businessman, Dr. Tosin Ajayi, is heating up at the Federal High Court in Lagos, with his widow Oluwayemisi Ajayi, raising allegations of adultery against a former Miss Nigeria, Helen Prest.

The widow, in a 27-paragraph counter-affidavit filed against Prest’s suit, said she and her husband were legally married under the Marriage Act and never divorced till his death.She alleged that Prest, with full knowledge of Dr. Ajayi’s subsisting marriage, carried on an illicit relationship with him as his concubine.

The suit was filed on July 23, 2021, and has First Foundation Medical Engineering Company Ltd (FFMECL); Registrar-General of the Corporate Affairs Commission (CAC); Oluwayemisi Ajayi; and Patrick Abak, a lawyer as first to fourth respondents.While Helen Prest was listed as the second plaintiff, her daughter Tomisin Ajayi was listed as the first plaintiff.The legal battle is centred on who should control FFMECL and other properties owned by the firm.In her 71-paragraph affidavit in support of the suit against the respondents and deposed to by Helen Prest’s daughter (first plaintiff), she averred that her late dad married Oluwayemisi and they had children, but they were separated for 35 years before her father’s demise.Tomisin claimed that in the course of the separation, the late Ajayi and her mother, Helen Prest married and gave birth to her.But in a counter-affidavit deposed to by the widow and filed on September 13, 2021, Oluwayemisi Ajayi averred that she was aware that Tomisin presents herself as the “love child of an adulterous relationship” between her deceased husband, Dr. Ajayi, “and his adulteress,” Helen Prest.The deponent stated that although she was not in a position to confirm if Tomisin Ajayi is a child of her late husband, because the late Ajayi did not introduce her to the family in his lifetime, she was ready to accept the first plaintiff in good faith as one of the beneficiaries of the estate of her deceased husband.On the ownership of FFMECL, the widow claimed that she and the late Ajayi built the firm together and that at no time was her deceased husband the sole beneficial shareholder or director of the company. She stated that since the incorporation of FFMEC, she had always been a shareholder and director of the company.On her marital status to the late Ajayi, the widow averred that she was legally married to the deceased and there was no divorce. She challenged Helen Prest to present any document in opposition to her marriage certificate.She stated: “My late husband never cohabited (and never decided to cohabit) as a common-law partner with the second plaintiff in the United Kingdom.“The second plaintiff was desirous of a marriage and legally cognizable relationship with my late husband, Dr. Ajayi, from the outset (including urging him to divorce me), a proposition which he consistently rejected throughout his life despite the second plaintiff’s incessant solicitations for same.”

The widow stated further: “Although Helen Prest was a concubine of my deceased husband, she was never a shareholder, director, officer, employee or business partner of, or otherwise associated with the affairs of, FFMECL or any other companies in which my husband was a major shareholder (including those wherein I am also a shareholder).”