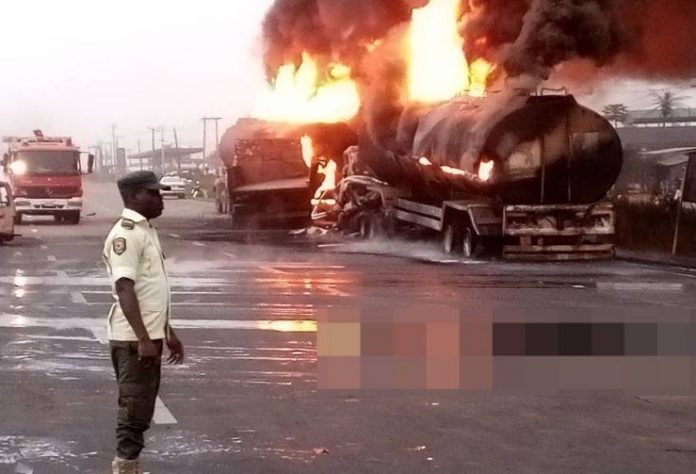 No fewer than 10 people were burnt to death in a tanker explosion at Araromi on Lagos-Ibadan Expressway on Thursday morning.

Umar said that the accident occurred around Conoil in Araromi before Sagamu Interchange on the expressway.

According to him, five vehicles were burnt in the raging inferno.

He said that victims of the accidents were burnt beyond recognition.

According to him, the vehicles involved in the accident are: a Mack truck marked AKL 198 ZT; an Iveco truck with no registration number; a Mazda bus marked FFE 361 XB, an unmarked Howo truck and the Mack tanker.

He attributed the cause of the accident to speeding by driver of the Iveco truck.

“Driver of the Iveco truck, who was travelling on top speed lost control and rammed into the tanker, which resulted to fire outbreak due to leakage,”

He added that the Mazda bus was engulfed by the fire, saying that all those that died were in the bus.

“The suspected cause of the multiple crash was excessive speed which led to loss of control on the part of the Iveco truck and smashed the tanker body which resulted to fire outbreak due to leakage.

“The Mazda bus got engulfed in the spark of the fire,” Umar said.

He added that the deceased were taken to the Olabisi Onabanjo University Teaching Hospital (OOUTH), Sagamu.

Umar, after visiting scene of the accident, commiserated with families of the victims.

He advised motorists to drive cautiously, obey traffic rules and regulations, and as well consider other road users while driving.

Earlier, FRSC had advised motorists and public to use alternative routes on Lagos-Ibadan Expressway due to a tanker explosion at Araromi Town before the Interchange.

Umar said: “The rescue operation is still on and people involved were yet to be confirmed because a bus is also involved.

“The crash scene was cordoned off to avoid secondary crash as traffic has been diverted.

“Men of Fire Service have arrived at the scene and effort is being made to put out the fire. Traffic has been temporarily diverted at Lufuwape U-turn to ease the traffic situation,” he said.

The sector commander advised motorists to remain calm and cooperate with traffic managers controlling the situation,” he said.