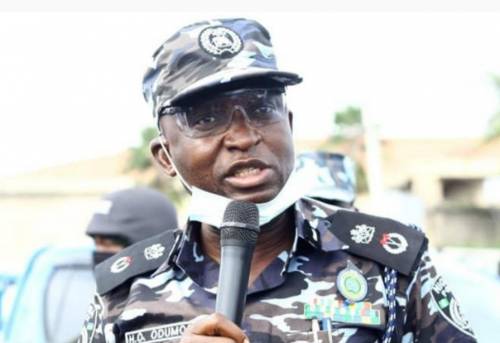 Commissioner of Police, Lagos State Police Command, AIG Hakeem Odumosu, yesterday, advised those who are not satisfied with the autopsy and toxicology reports on the late Sylvester Oromoni, to visit the Coroner Inquest which will begin today in Lagos, to express register their grievances or seek redress in the court.

He warned that the Police would not their hand and allow any act or omission that would threaten the peace in Lagos State Besides, Odumosu, maintained that the command on its part had concluded an investigation into the death of the 12 -year old Junior Secondary School 2 student and found the three Housemasters and five students earlier arrested in connection with his death, not culpable of an allegation of murder.

No evidence of blunt false trauma in his body. The findings in the oesophagus and stomach are not compatible with chemical intoxication. Death in this case is natural.Despite these and the following legal proceedings, the case file was duplicated and sent to the Director of Public Prosecution, DPP for legal advice.

Legal advice however indicated that there is no prima facie case of murder, involuntary manslaughter and/or malicious administering of poison with the intent of harm against the students and house masters. Hence they can not be prosecuted. They were all released on bail”., he stated.Giving a detailed account of how the investigation started, he recalled that a formal complaint was received on December 2, 2021, via a petition by V. O Grant & Co, and signed by A.E Afole et Al, and dated December 1, 2021.

In compliance with this directive, the SCID Panti took over the case on December 10, 2021, and continued investigation in earnest.In the course of the investigation, eight suspects were arrested. They included three housemasters of the college and five students who were said to have been mentioned by the deceased before his death.

The suspects were: Ansel Temile,14; Michael Kashamu, 15; Kenneth Inyang, 15; Favour Benjamin,16 and Edward Begue,16, while the house masters were: Valentine Igbokwe, 45; Ahmed Bariyu,52 and Adesaya Olusegun,42.A remand warrant dated December 7, 2021, was obtained at the Yaba Magistrate Court  to enable the police to detain the suspects for 21 days, in the first instance while the investigation continued

“On December 9, 2021, all the parties, including the deceased family, the school management and witnesses, were interviewed by me at the Command headquarters, Ikeja.During the open interview, it was unanimously agreed that another autopsy should be carried out where pathologists from all parties will be present. The investigation was extended to Delta State and Abuja.

I will like to state here that the investigation revealed that the same case was reported at the Area Command, Warri, Delta State, on December 1, 2021. It has also been established that a postmortem examination was initially carried out on December 2, 2022, by a consultant pathologist, Dr Clement Vhriterhire, of the Central Hospital, Warri, Delta.

The result of the first autopsy dated December 10, 2022, attributed the cause of death to acute lungs injury, due to chemical intoxication in a background of blunt force trauma.However, Toxicology screening was recommended and also carried out. While waiting for the result of the Toxicology, another autopsy was ordered by the Corona Magistrate in Lagos because of the status of jurisdiction.The corpse was therefore moved with an armed police escort from Delta State to Lagos State by TOS funeral and the autopsy conducted at the expense of the Lagos State Government.

The second autopsy was carried out at the Lagos State University Teaching Hospital on December 14, 2021, in the presence of representatives of all the parties involved in the case.The autopsy was carried out by Dr S.S Soyemi, the Consultant Pathologist and Chief Examiner, Department of Pathology and Forensic Sciences, Lagos State University Teaching Hospital Ikeja.

“Before the expiration of 21 days remand order, families of the students applied for their bail at Magistrate Court 1, Yaba. The application was approved, hence the students who were earlier remanded at Boys Home, Oregun, were granted bail.The House Masters were also granted bail after the expiration of the 21 days remand order.” The result of the second autopsy carried out in Lagos which was released on December 21, 2021, attributed the cause of death to septicaemia, lobar pneumonia with acute pyelonephritis and pyomyositis of the right angle.On December 30, 2021, the Toxicology screening result of the first autopsy carried in Warri was released.

The result issued and signed by Dr Clement Vhriterhire, the same Doctor who carried out the initial autopsy, attributed the cause of death to acute bacteria, pneumonia due to severe sepsis.

The allegation that the deceased was being forced to join a cult group was also not established, as other students interviewed denied this.The final result of the postmortem and Toxicology examination conducted both at Warri and Lagos, agreed that the deceased died a natural death.“In spite of the transparent investigation carried out by the Police and the non-establishment of prima facie case against the suspects, some members of the Ijaw Youths Council, Lagos, led by Comrade Henry Oyobolo, protested in front of DOWEN college for over two hours on January 6, 2022.The protesters, including masquerades, carried placards and were drumming, thereby causing panic and apprehension.

As much as we commiserate with the bereaved family on the death of their lovely and promising child, it is advised that the protesters and other individuals or groups, who are still aggrieved, should go to the law court to seek redress, instead of taking laws into their own hands.” Members of the public who may have any misgivings about the outcome of Police investigation, medical enquiry and legal advice with this case, are advised to follow due process in law, rather than resorting to self-help.

The Police will not tell their hands and allow any act of omission that could threaten the peace being enjoined in the state.