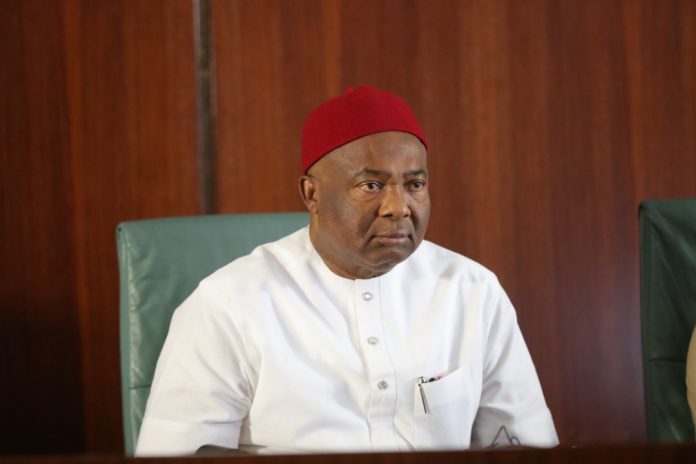 The Supreme Court is expected to fix hearing date anytime soon in a motion filed by the Peoples Democratic Party (PDP) seeking to sack the Governor of Imo State, Hope Uzodinma.

It was learnt that parties have filed some additional processes in relation to the motion filed last year and that the PDP, through its lawyer, Phillips Umeadi recently filed a fresh document, requiring the Supreme Court to set the case down for hearing.

Information at the court’s Registry revealed the motion by the PDP, in which it’s praying the Supreme Court to reverse its decision sacking Emeka Ihedioha, is now ripe for hearing because some processes were recently filed by some of the parties.

It was gathered that the next step is for the Deputy Registrar (Litigation) to liaise with the Chief Justice of Nigeria (CJN) for a hearing date, which would soon be communicated to parties.

Listed as respondents to the motion on notice, filed by the PDP in an earlier appeal by Ugwumba Uche NWosu, marked: SC/1384/2019 are: Nwosu, the Action Peoples Party (APP), Uche Nnadi and the Independent National Electoral Commission (INEC).

It is PDP’s contention that it was wrong for the court to declare Hope Uzodinma of the All Progressives Congress (APC) the winner of the March 9, 2019 governorship election in Imo State after disqualifying Nwosu from contesting the election on the grounds that he allowed himself to be nominated as the governorship candidate of both the Action Alliance and APC for the same election.

It wants the court to declare that both the AA and the APC did not sponsor any candidate for the election in view of Nwosu’s double nomination by the AA and APC and his subsequent disqualification by the court in its judgment given on December 20, 2019.

The PDP also wants the court to order that Hope Uzodinma was not a candidate by himself or of any political party at the election; and to order INEC to withdraw the certificate of return issued to Senator Hope Uzodinma.

The party is equally praying the court to order INEC to issue a certificate of return to its candidate in the election, Emeka Ihedioha “as the duty elected Governor of Imo State, having scored the second highest number of votes in the said election sequel to the judgment of this court in Appeal No: SC/1462/2019 – Senator Hope Uzodinma & another v. Rt.Hon.Emeka Ihedioha & others delivered on 14th January, 2020.

It is further praying the court to issue an order, directing that Ihedioha be immediately sworn-in as the Governor of Imo State.

The grounds relied on by the PDD in seeking the reliefs includes that the court had, in its December 20, 2019 judgment, found that the Nwosu was nominated by both APC and AA as their candidate for election held on 9th March, 2019, and conclusively held that he was disqualified by the provisions of Section 37 of the Electoral Act for double nomination.

It stated that although Ihedioha was declared winner of the election and subsequently sworn-in, the Supreme Court in its judgment delivered on January 14, 2020 in the appeal, marked: SC1462/2019, filed by Uzodinma, held that the appellant (Uzodinma) and not Ihedioha that scored the highest number of votes in the election and ought to be returned as the duly elected governor.

The PDP added that by the clear terms of the Supreme Court’s judgment of December 20, 2019 in the appeal by Nwosu, it was obvious that neither the AA nor the APC fielded any a candidate for the election held on 9theMarch 2019 and as such Uzodinma could not have been returned as the election as a candidate of the APC,

It said: “APC could not have substituted the appellant (Nwosu) with a view to further nominating the said Senator Hope Uzodinma as their candidate because that right is not available to the party under the Electoral Act.

“Senator Hope Uzodinma could not have been a candidate in the election as an independent candidate as such right is not available to him.

“Rt. Honourable Emeka Ihedioha, who is the candidate nominated by the third respondent/applicant (PDP), and who scored the second highest number of votes after Senator Hope Uzodinma, from the judgment of this court, ought therefore to be issued a certificate of return by the fourth respondent (INEC) and sworn in accordingly.

A legal officer in the PDP, Adedamola Farokun stated, in a supporting affidavit, that by virtue of the Supreme Court’s judgment in Uzodinma’s appeal, Ihedioha scored the second highest votes after Uzodinma.

Farokun added that by virtue of the Supreme Court’s earlier judgment in the appeal by Nwosu, which nullified the candidature of Nwosu as the duly nominated candidate of the APC, the APC had no candidate for the governorship election held on the 9th March, 2019.

He argued that it was Ugwumba Uche Nwosu who was the duly nominated candidate of the APC, which nomination was on the records of INEC up to and after the election, but whose nomination was nullified by the December 20,2019 judgment Supreme Court.

Farokun contended that as at when Nwosu’s candidacy was nullified, the APC could not have validly substituted its candidate as there are no provisions for post-election substitution of candidates.