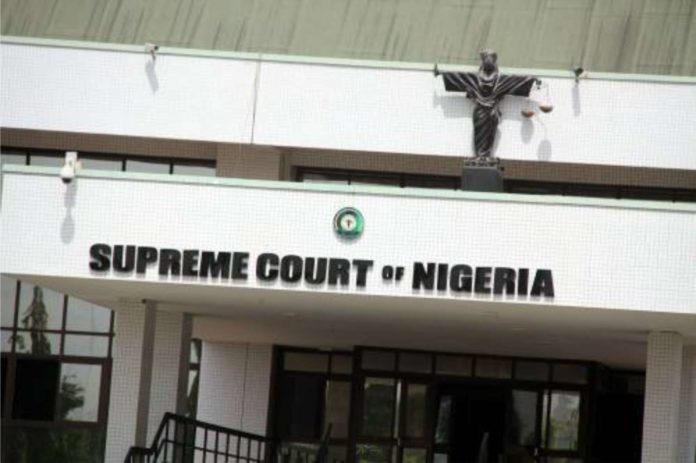 The Supreme Court on Friday partly resolved the ownership dispute in 17 oil wells ownership in favour of the Rivers State government.

In a judgement prepared by Justice Ellen Ogunwumiju but delivered by justice Emmanuel Agim, the apex court dismissed the counter claim ownership put forward by the Imo State government.

According to Justice Agim, reliefs One, Three, Four, Five, and Six sought by the Rivers State government were granted by the court.

The court, however, refused to grant reliefs Two, Seven, and 10.

The court also agreed that the correct instrument, maps, and documents relied on determining the boundary, were those used by the Rivers State government in delineating the boundary line between both states.

It granted the relief that Rivers map showing boundary line between the state and Imo State represents the correct boundary between both states.

The apex court, however, refused the sum of N500,000 as a cost for the prosecution of the suit instituted by the Rivers State government.

It also refused an order directing the Attorney-General of the Federation (AGF) to calculate and refund all revenue that have been wrongly denied to Rivers State or wrongly paid to Imo State.

At the last adjourned date of February 7 when the parties adopted their final brief of argument, the AGF had prayed the court to dismiss the matter and direct Rivers State to go and file a suit before the Federal High Court.

In their grounds of argument, the AGF and Imo State said witnesses of the disputed area ought to be called to give evidence before the suit could be amicably resolved.

They demanded that the intervention of the National Boundary Commission would also be required to give evidence at the Federal High Court before any conclusion could be drawn.

But counsel to the Rivers State government, Joseph Daudu, opposed the demand of the AGF and Imo State and asked the apex court to dismiss it.

He argued that documentary evidence placed before the court were enough for the Supreme Court to resolve all issues in dispute in relation to the oil wells.

In his reaction, Governor Nyesom Wike of Rivers State welcomed the decision of the Supreme Court on the dispute between the two states.

Before the matter got to the Supreme Court, there had been a political arrangement put in place by the administrations of former Governor Peter Odili of Rivers and former Governor Achike Udenwa of Imo for revenues from the disputed wells to be shared equally between the two states.

However, former Governor Emeka Ihedioha of Imo obtained a presidential memo when became governor in 2019, directing that all the revenues should be ceded to his state.

Displeased by the move, the Rivers State government approached the court to file a suit against the presidential directive

Governor Wike lauded the court judgement on Friday at a stakeholders’ meeting which also culminated in a reception for the victory at the Government House in Port Harcourt, the state capital.

He berated former Governor Emeka Ihioda of Imo State for jettisoning the political arrangement in what he described as a selfish move to acquire the entire proceeds from the wells in dispute.

The governor, who was addressing various leaders in Rivers at the meeting, also faulted the role of the National Boundary Commission in the dispute.

He, however, extended an olive branch to the Imo State government that his administration was open for talks without prejudice to the Supreme Court judgement.