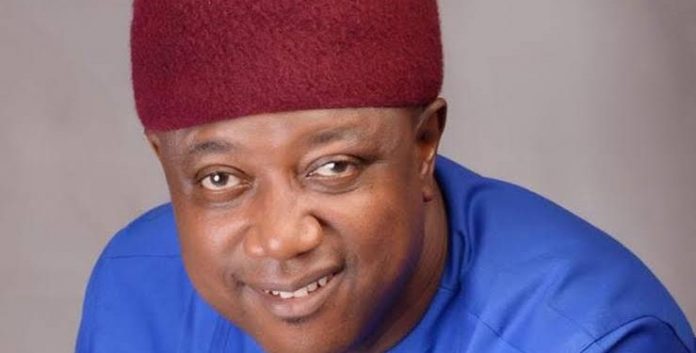 The Supreme Court on Friday 16th April, 2021 announced Frank Ibezim of the All Progressive Congress (APC) as the Senator-elect for the Imo North Senatorial district bye-election.

The determination by the apex court will put to rest the lingering legal fireworks on the subject matter.

In arriving at it’s decision, the apex court in a unanimous judgment voided, nullified and set aside the concurrent judgments of the Federal high court in Abuja and that of the Court of Appeal which nullified the candidacy of Ibezim on the ground of perjury.

Justice Emmanuel Agim, who delivered the judgment, held that the suit which led to disqualification of Ibezim for allegedly supplying false information to secure nomination was statute barred at the time it was instituted.

Justice Agim said in the judgment that the suit was not filed within 14 days when the cause of action arose.

Specifically, the apex court held that section 285 of the 1999 was grossly violated by the plaintiff in the suit because the mandatory 14 days for such suit to be filed was not complied with.

Besides, the apex court held that the disqualification of Ibezim based on a statute barred suit was a nullity because the burden of proof for false information allegations was not proved as required by law..
Justice Agim while setting aside the judgments of both the federal high court and that of the Court of Appeal held that the appeal of Ibezim against the two judgments was meritorious, enforceable and granted it.

The Supreme Court subsequently declared Ibezim as candidate of the All Progressives Congress (APC) in the December 5, 2020 by-election and also as winner of the election.

Ibezim had been kicked out as APC candidate on account of irreconcilable differences in the names on the certificates he presented to secure nomination and for supplying false information in his other documents.

A three man panel of Justices of the Court presided by Justice Abubakar Yahaya in a unanimous judgment had agreed with Justice Inyang Ekwo of the Federal High Court, Abuja that Ibezim submitted false information to the Independent National Electoral Commission (INEC) in aid of his qualification for the Imo North Senatorial by-elction.

Justice Ekwo had in a judgment delivered on December 4, 2020 sacked Ibezim as candidate of the APC for the December 5 by-election in Imo North Senatorial District.

Ekwo had disqualified him from contesting the election on the grounds that he made false statements and declarations in the affidavit and documents he submitted to his party, the APC and INEC.
The false information was said to be in respect of his West African Examination Council (WAEC) certificate wherein the judge held that the names on the documents were not only different but irreconcilable and accordingly ordered his disqualification from the bye-election.

One of the certificates bears Chukwuemeka Frank Ibezim and another Francis Ibezim Chukwuemeka among other differences.
Dissatisfied with the high court decision, Ibezim, the favoured candidate of governor Hope Uzodimma, then approached the Appeal Court with prayer that his disqualification be voided and set aside.
However delivering judgment in the appeal, Justice Stephen Adah who read the unanimous judgment of the Court of Appeal had held that the judgment of the high court cannot be faulted since it was evident that the appellant submitted false information to APC and INEC.

Justice Adah had stated that no other person order than the institution that awarded certificates can lawfully effect correction on them.

He advised that candidates must be diligent with the ways and manners they put their names in documents, stressing that it is a serious thing if a person’s name is misplaced or spelt wrongly.
The appeal court had also disagreed with Ibezim that the case was statute barred, adding that from available records, it was filed 11 days after the cause of action arose and not after 14 days as claimed by Ibezim.

According to the appellate court, the legal action was instituted on September 23, 2020 whereas INEC had received the said forged documents from the APC on September 13, 2020.

With the Supreme Court fresh decision, the Independent National Electoral Commission INEC will now proceed to formally declare winner of the election and issue Ibezim certificate of return as required by law for him to be inaugurated as a senator.

RE: APPOINTMENT OF SIXTEEN (16) JUSTICES FOR THE COURT OF APPEAL BENCH: CALL FOR EXPRESSIONS OF INTEREST