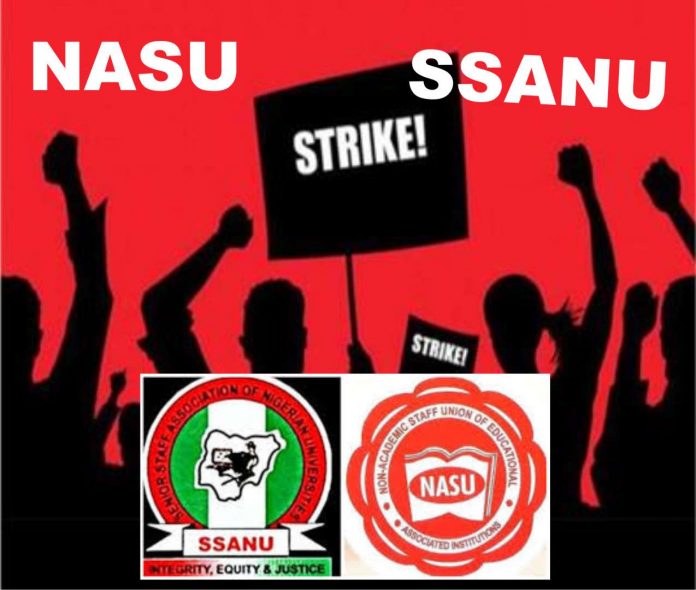 The Renegotiation meeting between the Federal Government Team and the leadership of the Non-Academic Staff Union of Allied and Educational Institutions, NASU on Friday ended in deadlock as the union walked out of the meeting, accusing government of not being ready for renegotiation.

Recall that NASU and its sister union, the Senior Staff Association of Nigerian Universities, SSANU, under the umbrella of Joint Action Committee, JAC, had embarked on a two week warning strike in March and after its expiration, it was extended to another two weeks.

After storming out of the meeting yesterday, the General Secretary of NASU, Prince Peters Adeyemi accused the government team of the Renegotiation Committee of lack of commitment and nonchalant attitude to the renegotiation which is aimed at resolving the crisis.

Adeyemi in a statement he issued said that NASU from the agenda presented by the government side came to the conclusion that the meeting called was just a window dressing and aimed at playing to the gallery.

According to him, “A meeting of the Renegotiation Committee of the FGN/NASU 2009 Agreement in the Universities and Inter-University Centres was scheduled to hold today, Friday, 22nd April, 2022. NASU Renegotiation Team went to the venue of the meeting at the National Universities Commission (NUC), Abuja full of high hopes that this very important renegotiation meeting is a process that will bring peace to the University system.

“Unfortunately, the Government Team of the Renegotiation Committee led by Prof. Nimi Briggs, the Pro-Chancellor of Federal University, Ndufu-Alike, Ikwo, Ebonyi State was not ready for any renegotiation.

“This was very obvious from the moment the meeting commenced looking at the first item on the report of the Sub-committee of the Renegotiating Committee.

“The meeting of the FGN/NASU Renegotiation Committee chaired by Dr. Wale Babalakin, SAN, the then Pro-Chancellor of the University of Lagos, held on Friday, 10th August, 2018 set up a Sub-committee comprising members of Government Team and NASU in the Renegotiation Committee to examine the Memorandum of Demand (MOD) of NASU and identify issues that were contentious, non-contentious and those that required further clarification in order to facilitate the renegotiation of the issues involved.

“On resumption of the renegotiation today, Friday, 22nd April, 2022, the Government side did everything possible to set aside the report of the Sub-committee, which was chaired by Prof. Olufemi Bamiro, with the current Chairman, Prof. Nimi Briggs as member.

“The Government side was only ready to enter disagreements on all items on the Union’s MOD as if that was a pre-determined position before the meeting.

“It is obvious that the Government side of the Renegotiation Committee lacks capacity to commit their Principals (the Federal Government) on any issue of the negotiation. This we found to be strange and not in line with the principles of collective bargaining.

“It is shocking and surprising to the Union that at this time when all hands should be on deck to resolve the lingering crisis in the University system in order to enable our children return to the classroom, the Government side of the Renegotiation Committee will show non-commitment and nonchalant attitude to the renegotiation, which is aimed at resolving the crisis.

“We came to the conclusion that the meeting called was just a window dressing and aimed at playing to the gallery.

“NASU members of the Negotiation Committee therefore had no option than to inform the Government side that they have to go back to their Principals, i.e., NASU members in the Universities and Inter-University Centres to inform them of the development and get their directives on further steps to take.”