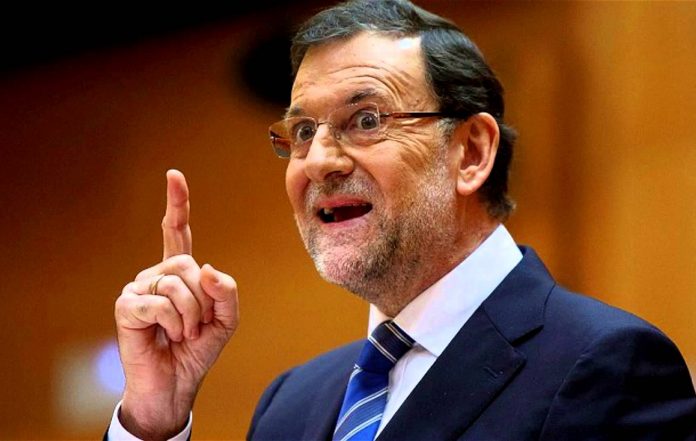 Spanish Prime Minister Mariano Rajoy urged Catalonia’s leader today to “act sensibly” and renounce an independence bid to head off a threat by Madrid to impose direct rule, a prospect that has sent shock waves across the country.

Rajoy issued his appeal in the national parliament where he sought to win more political support for his threat to take direct control of Catalonia on Thursday unless the rebel regional government drops its plan to break away.

The move would need only a vote in Spain’s upper house, where Rajoy’s People’s Party holds an absolute majority.

It would be the first time in Spain’s four decades of democracy that direct rule has been imposed.

That prospect in the eurozone’s fourth-largest economy has prompted hundreds of Catalan firms to move their headquarters, led Madrid to cut economic growth forecasts and rattled the euro.

Regional leader Carles Puigedmont has already defied Madrid once this week, reiterating on Monday an ambiguous independence declaration he made last week and immediately suspended.

“I ask Puigdemont to act sensibly, in a balanced way, to put the interests of all citizens first,” Rajoy said today, mentioning both residents of the autonomous region, which produces a fifth of Spain’s wealth and has its own language and culture, and the rest of the country.

Thursday’s deadline is Puigdemont’s last chance to abandon an independence declaration which Madrid has rejected as illegal.

“It’s not that difficult to reply to the question: has Catalonia declared independence? Because if it has, the government is obliged to act in one way, and if it has not we can talk here,” Rajoy said in parliament.

Almost 700 companies pulled out of the northeastern region between October 2 – the day after a referendum on independence which Madrid branded illegal – and October 16, according to Spain’s companies registry.

Tourism, a vital part of the Catalan economy centred on its seaside capital Barcelona, has also taken a hit, with activity falling 15% so far this month, industry association Exceltur said on Tuesday.

The region’s tourism industry could make €1.8 billion less than usual in the fourth quarter “if the volatility and confrontation get worse in the coming months”, Exceltur said in a statement.

Spain’s biggest political crisis since a failed military coup in 1981 dragged the IBEX stock index lower than its European peers.

Unless there is a clear renunciation of the independence bid, the premier is set to invoke a never-before-used article of the 1978 constitution, which would impose direct central rule.

But Catalan foreign affairs chief Raul Romeva told a news conference in Brussels: “Elections are not on the table now.”

As the threat of direct rule neared, the Catalan government took a combative tone on Tuesday.

“Giving in forms no part of this government’s scenarios,” spokesman Jordi Turull said. “On Thursday, we won’t give anything different than what we gave on Monday.”

Tempers have flared since Monday after the jailing of two separatist leaders pending an investigation for alleged sedition.

Tens of thousands of protesters gathered along Barcelona’s Diagonal Avenue on Tuesday to call for their release, whistling and shouting “freedom” and “out with the occupying forces”.

Puigdemont said, “Sadly, we have political prisoners again,” referring to the military dictatorship of Francisco Franco, who suppressed Catalan culture and language until his death in 1975.