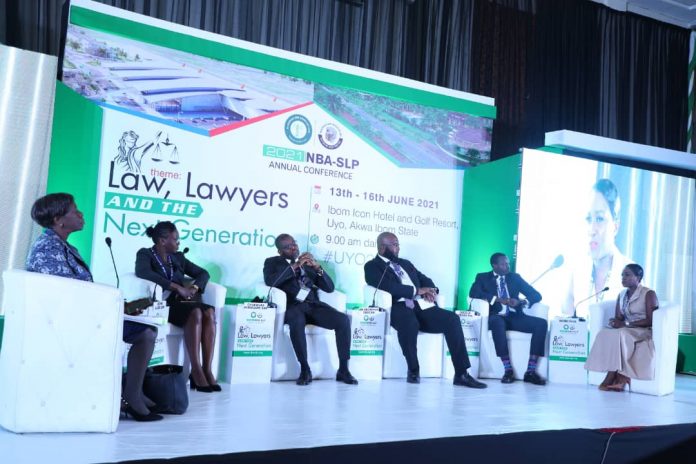 The legal profession, like most others, is dynamic, as changing paradigms and tools of the trade, as well as the outlook of the market, continue to shape its present profile and future prospects.

The declining fortunes of litigation in particular, some stakeholders say, is largely because its practitioners have been either unwilling – or unable – to appreciate said dynamics, let alone try to exploit them to full advantage.

In a session titled, ‘THE END OF LITIGATORS? AWAKENING THE NEXT GENERATION,” a star cast of legal minds, representing various levels of experience at the Bar, took a hard look at the current state of litigation and the declining interest among younger lawyers in the practice (relative to commercial law practice, for instance, or even for vocations other than law), and how this trend can be sustained far into the future.

Speaking from the perspective of younger lawyers as prospective inheritors of the mantle, Obasa, a managing partner at the Ibadan-based law firm of Pelican Crest Legal Practitioners (who also doubles as the Chairman of the Ibadan branch of the NBA Young Lawyers Forum) began by stating that there was enough blame to go round as to what – or who – is responsible for the current state of litigation practice.

On the part of young lawyers, he decried the lack of vision (as to their desired trajectory in the profession) that some his peers have largely exhibited, as well as their lack of patience and internal fortitude – a situation which, he said, has led some of them to hop from one law firm to another with indecent haste, like the proverbial rolling stone which gathers no moss.

A third reason is a crippling sense of entitlement among young lawyers, Obasa said – which usually translates into a lack of empathy with clients, and a tendency to put their own needs ahead of those of clients.

Other panelists also dwelt on the need to change the prevailing perception of lawyers in general, and litigators in particular, among the general population.

On the vexed issue of fees, billing, remuneration of young lawyers, as well as the general interaction between the seniors and juniors in law firms, and whether these matters should be subject to some form of regulation, the panelists were agreed that many senior lawyers (and young lawyers, too) undervalue their work and the worth of their legal training, in the eyes of their clients.

Dr. Okocha, the assistant managing solicitor at the Port Harcourt-based firm of Okocha & Okocha Legal Practitioners & Notary Public, called on law firms, as well as individual lawyers to demand an ‘inclusive fee’ that dignifies their work and profession.

Speaking in the same vein, Mrs. Alabi, the Founding Partner at Primera Africa Legal, dwelt at length on her own experience in this regard, from the perspective of her time in England and her present practice in Nigeria, and how she and others like her have been able to surmount the dilemma that many providers of legal services  face in the Nigerian market – namely, charging a measly fee in the hope of securing volume of business from clients, or charging  a proper fee that reflects the value of the work done and honours the legal profession.

The panel also looked at the issue of incentives for female wigs, particularly nursing mothers in terms of, say, letting them close from work earlier than others, and/or taking their work home. Chukwuka Ikwuazom, SAN, a Partner at the law firm of Aluko & Oyebode, spelled out his company’s policy in this regard, which he said, was simply a reflection of the growing flexibility of its overall work culture and business model.

This growing flexibility, he said, covers the needs of nursing mothers, as well as addresses a host of work-life balance issues – including the growing clamour, especially by Millennials, for a less-regimented, less office-oriented work regime. Having said that, though, Ikwuazom was quick to add that office-based work – and the confining of legal documents to the office space – serve to protect the confidentiality of client information.

Other speakers including the Chairman of the session, Mrs. Adekoya, SAN also described the specific incentive system (or lack thereof) for nursing mothers at their respective firms.

In summary, the panel’s position, as articulated by Mrs. Adekoya, SAN, was that addition to the need for better remuneration for young lawyers and a better billing system overall; and the need for a new orientation on their part as advocated for by Mr. Obasa, there is an even more urgent need for up-skilling (especially in the dexterous use of digital resources and other new and potentially disruptive technologies) on the part of younger litigators in the quest to render more qualitative legal services and become more globally competitive and profitable  – and in the process, preserve and enhance the profile and fortunes of that area of law for generations to come.