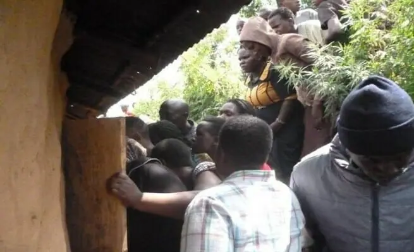 One Ime Sunday, who allegedly killed and buried his daughter in Omum Unyiam village, Etim Ekpo Local Government Area of Akwa Ibom State, told the Police she grabbed his manhood.

It was gathered that Sunday, after killing his 20-year-old daughter, Ofonmbuk, buried her at the family compound, Omum Unyiam village to cover his track.

Speaking on the arrest in Uyo, yesterday, the state Police Public Relations Officer, Mr Odiko MacDon, said: “The suspect alleged that there was a family misunderstanding, which led to a fight.

“During the fight, the victim held his manhood. So he, in turn, used a stick to hit her on the head, which led to her death.

“He decided to bury her in a shallow grave to cover his tracks.

“The Police have exhumed the body and preserved same for autopsy.”

The PPRO added that on September 29, 2022 at about 1400hrs, one Edet Uyo Ntung was arrested for the murder of one Emem Monday Uyo, both of Afaha Ediene village in Ikono Local Government Area.

He said: “Preliminary investigation revealed that there was a lingering family feud.

“The suspect, who is the uncle and family head of the deceased, invited him to his residence on the pretext of addressing the problem.

“Rather than doing so, he brought out his machete and cut his face, hand, neck and other parts of his body, leading to his death.”