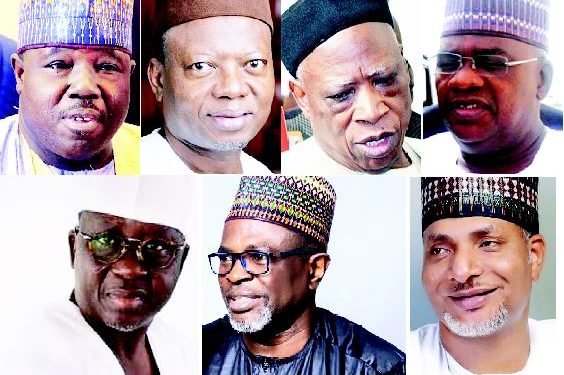 Seven are in the race for now. More may still join. Few may also withdraw along the line. But, the All Progressives Congress (APC) convention itself has remained elusive.

Although the unelected National Caretaker Committee, led by Yobe State Governor Mai Mala Buni, has unfolded plans for ward, local government and state congresses, the fate of the national congress is hanging in the balance.

What actually is delaying the convention?

Reminiscent of how Military President Ibrahim Babangida was postponing the handover date, tinkering with the transition programme and changing the goal post amid the game,the tenure of the Buni Committee had been extended thrice. The latest extention of the tenure of the interim committee is worrisome as it is indefinite. This has fuelled speculations about an inexplicable hidden agenda.

The chairmanship aspirants, nevertheless, rely on hope, the elixir of life. The seven are from the North. This may give a vague idea of imminent rotation or zoning, both of the chairmanship and the presidency.

Former Nasarawa State Governor Tanko Almakura has not publicly declared his intention. But, party sources said the chieftain of the defunct Congress for Progressive Change (CPC) is a strong contender. A source said:”The president is always a fan of his old allies.” It could not be ascertained whether he will also emerge as the candidate of the APC Governors’ Forum.

Fifty eight year old Senator Sani Musa, who hails from Paikoro in Niger State, has embarked on extensive consultation and mobilisation. A loyal party man, Musa has been described as a man of integrity. He is a one-time governorship contender in Niger State, a delegate to the National Convention, and a member of the APC Presidential Election Campaign Committee for 2019.

The senator had canvassed the revolution of the electoral system through the use of the card reader and Permanent Voter’s Card. Many have described him as a bridge builder who possess high inter-personal skills.

In the Senate, he had served on some committees, including Appropriation, Petroleum Resources, Foreign and Local Debts and Water Resources. In the APC, he had served as member of NEC, Contact and Strategic Committee, and Constitution Review Panel.

In 2015, he was arrested, but refused to divulge any confidential information on the card reader. The Business Administration graduate from Ahmadu Bello University, Zaria, where he was the President of Zodiac, served as Special Adviser on Investment and Infrastructure in Niger State; director of Niger State Development Company Limited, Chairman, Task Force on Environmental Management and Managing Director, First Pacific Nigeria Limited. He also obtained a Certificate in Conflict Analysis from the United States Institute of Peace. Musa is held in esteem in the senate as an organised, dedicated, passionate and hardworking politician. He is said to be goal oriented, focussed and patriotic.

Former Nasarawa State Governor Abdullahi Adamu is a party elder endowed with experience. He is a no-nonsense politician. He knows his onions.  After serving as governor for eight years, he was elected senator. In 2007, he was a presidential aspirant on the platform of the Peoples Democratic Party (PDP).

Another aspirant is the eminent politician from Gombe State, former Governor Danjuma Goje, former Minister of State for Steel Development and now, senator. He is also a former PDP chieftain; bold and fearless.

Former Borno State Governor Modu Sheriff served as a senator before becoming governor in 2003. He served for two terms. He defected from the APC to PDP, where he was briefly the national chairman. There were allegations that he wanted to use the position as a stepping stone to the realisation of his presidential ambition. When he was shoved aside as chairman, Senator Ahmed Makarfi became the PDP caretaker chairman. Some months ago, Sheriff retraced his steps to the APC.

Mohammed Mustapha hails from Gambari District in the Ilorin East local government area of Kwara State. He is 48 years old.

He has distinguished himself in business, politics and humanitarian services. He founded the Saliu Mustapha Foundation to serve as a platform for human empowerment and community development.

Mustapha is a former deputy national chairman of CPC. He played a role in the merger of the CPC with other tendencies that gave birth to the APC. He was a signatory to the merger agreement on behalf of the CPC in the coalition.  Before he became the deputy chairman of the CPC, he had served as an Ex-Officio and a foundation NEC member of the party.

APC is in a dilemma. Consensus building appears difficult. There are internal contradictions. There are divisions. Can these pave the way for a peaceful convention?