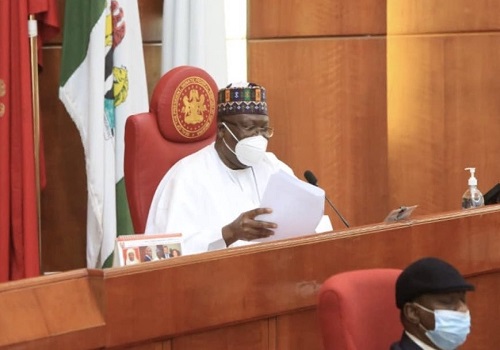 Lawan was speaking on a Point of Order by Deputy Senate President, Ovie Omo-Agege during plenary on Wednesday. He said that the Senate never voted along party lines with regards to the three per cent equity share allocated to host communities in the bill which has been signed by President Muhammadu Buhari into law.Lawan said that the allegation was totally false.“The senate, as far as I can remember never voted along party lines not even Clause 52(3) of the Electoral Act.“We had majority of APC voting and even two senators from the PDP voted along a line that appeared to be the one that carried the day.

“As politicians, ours is to lobby, to engage our colleagues each time there is an issue that we feel very strongly interested, an issue that we feel can make life better for those that we represent.“If you are not able to get what you campaigned for, there will always be another day and that is the spirit,” he saidLawan added: “I will encourage us to talk less to the press on ways that will give the press the wrong impression.

“There are many communities in my district that are host communities based on the provisions of the PIA.“There was never a time that I am aware of that the APC as a party here in the senate or outside the senate met and took a position that the people of the host communities in the Niger Delta be surcharged by reducing the equity share of the communities.“A decision has been taken by the Senate, that bill has been passed with caveat that those of us who are dissatisfied, an opportunity will be given to us as we move on to have this Act amended,’’ he said.The News Agency of Nigeria (NAN) reports that Abaribe was absent at Wednesday’s sitting.