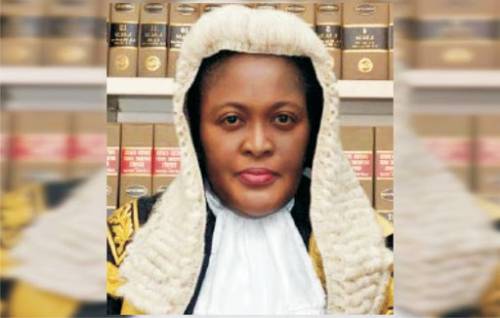 The Supreme Court, will on Thursday, hold valedictory session in honour of Justice Mary Odili who will bow out of active judicial service, having clocked the 70 years mandatory retirement age

The ceremony, which will be presided over by the Chief Justice of Nigeria, CJN, Justice Ibrahim Muhammad, will take place at the main courtroom of the apex court.

Odili’s retirement will further deplete the number of justices on the apex court to 16, just as another of her colleague, Justice Ejembi Eko, will also bow out next Monday.

Information from the official website of the Supreme Court showed that Justice Odili (nee Nzenwa), was born on May 12, 1952 at AmudiObizi, Ezinihitte – Mbaise L.G.A. of Imo State.

Justice Odili later proceeded to the University of Nigeria, Nsukka (Enugu Campus) and obtained her Bachelor’’s Degree in Law (LL.B (Hons)) in 1976.

She attended the Nigerian Law School in 1977 for her B.L certificate.

Justice Odili was appointed a Justice of the Supreme Court on June 23, 2011, and was later conferred with National Honour Commander Federal Republic, CFR.

She is married to a former Governor of Rivers State, Peter Odili, and their marriage is blessed with children.