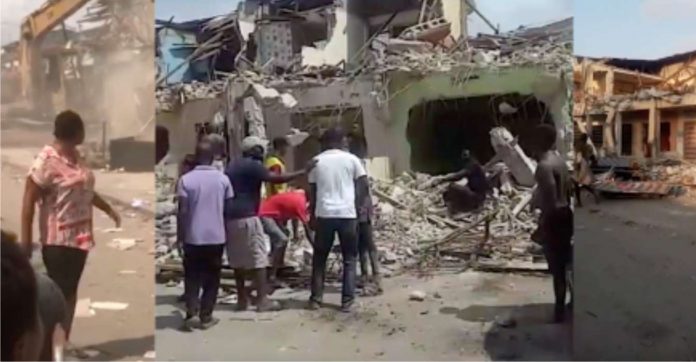 Traders and other stakeholders at the busy Oyinlola market, FESTAC Town, Lagos State, are presently counting their losses following the demolition of the market on Saturday.

Stakeholders in the market said it was selfish and insensitive for the Chairman of the Local Amuwo-Odofin Local Government Area, Valentine Buraimoh, to order a demolition without prior notice to the traders.

SaharaReporters gathered that security operatives, who were present during the demolition, fired gunshots to scare the people away as hoodlums also used the opportunity to cart away millions of goods from the traumatised traders.

The demolition, according to the traders, was unexpected as there was no prior notice to that effect.

However, the local government authorities stated that the demolition was carried out due to the structural defects of the buildings.

A shop owner told SaharaReporters that the reason claimed by the LGA was false and baseless as the shops were in good standing.

She said, “I was shocked when I heard of the demolition. l heard them saying that they demolished them because of the structural defects of the building; there was nothing like that. Who carried out the test as to whether the shops were in good condition or not? People didn’t know it was going to happen. If not, we would have taken pictures of their shops before the demolition. For how many years have those shops been there and there was never for once a building collapse?”

She added that the government ought to carry the traders along, considering the peculiarity of the bad economy at this period.

Another victim, who leased out her shop to a woman and mother of 11 children, who paid N40,000 yearly, said the business had since stopped and the children were without reasonable care.

“This woman wanted to pay her rent to me recently, but I asked her to hold on still. Thank God I had not collected the money from her. She fainted while the demolition was going on. So many other people make their livelihood from this same market.

“Some of the traders stocked their Christmas goods recently. You know what the country is; they had to get loans so they could stock and sell; school fee is there, the rent too,” she lamented.

SaharaReporters gathered that while the demolition was going on, some thugs came and made away with people’s goods.

The solicitor for the traders, Ike Onyefulu, in an interview, said he was disappointed in the local government authorities for demolishing the shops without prior notice.

He said, “There are laws in Nigeria. There are extant laws, but the problem is the enforcement of those laws by people. The urban and regional town planning law of Lagos State made specific provisions for any demolition of property either private or public but this is not adhered to.

“No matter what you have as the reason for the demolition of a market, not only law; common sense should tell you to give people notice to move their property, paste it so that people will know that they are using the property at their own risk. That is how things should be done. They should have given notice even if it is for seven days, but that was not done.”

Onyefulu also confirmed that police officers and soldiers of the Nigerian Army were present at the site with guns, thereby causing confusion that allowed the hoodlums to have a field day on people’s property.

“The police and the army were there with their AK-47 rifles, shooting into the air so that people were more traumatised and confused. Some people had travelled for the weekend; they were not around. Some that didn’t travel were in their houses. It was a Saturday and those that were even in the shops, it took them by surprise that they were not able to save their goods.

“How do we account for the property worth billions of naira that was looted there, when there were over 5,000 shop owners? This is coming at a time that people are yet to recover from the effects of COVID-19 and the EndSARS protest.”

Onyefulu said he had written letters to the state governor, Babajide Sanwo-Olu, the council chairman, and the FESTAC Residents Association since three weeks ago, but he has yet to get a reply.

“How would the state governor give such order as some of the people are claiming? Our letter was delivered. I want to believe the governor is not aware of this madness. In Lagos State, if a landlord wants a tenant to leave, the law says he has to give the tenant notice to quit and if that one refuses to go, you have to go to court to obtain the order but that didn’t happen in our case,” he explained.

When contacted by SaharaReporters, the LGA Chairman, Valentine Buraimoh, said he had consulted with the stakeholders and there was no way the traders would say they were not aware.

He promised that another market would be built within the next three months and “the original allottees would be given utmost priority.”

Pastor sentenced to life imprisonment for sodomising pupils in Uganda