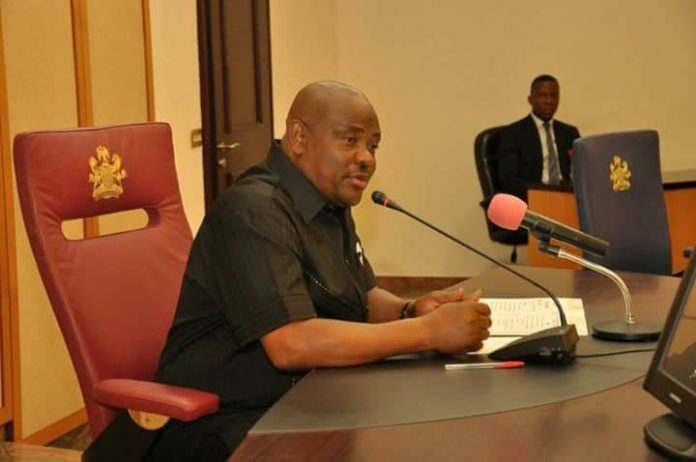 The Rivers State Governor, Chief Nyesom Wike has been lauded for providing enabling environment for the establishment of enduring infrastructure and human resources development in the state which gave impetus to the commencement of work on the Bodo-Bonny Road project.

In a statement, Publicity Secretary, Coalition of Rivers Patriots, Barrister Barilede Thompson noted with pride that the recent flag-off of the Bodo-Bonny Road was a further testimony of Wike’s inclusive administration which places the interest of the state above other considerations.

While also commending the Federal Government for eventually responding to the demands of the government and people of Rivers State, and indeed, the entire Niger Delta,  and  taking the bold step of flagging-off the construction of the Bodo-Bonny Road, the group lauded the governor for working with the host communities to provide a conducive atmosphere for the project.

The group further lauded Wike for his commitment to partnering with the Federal Government to ensure the timely completion of the road, a clear deviation, according to the Patriots, from the false claims of the failed governorship candidate of the All Progressives Congress (APC) in the 2015 elections, Dr Dakuku Peterside and his sponsors that Wike was opposed to the project.

According to the Rivers Patriots, the assurance of cooperation of the government and people of Rivers State towards ensuring timely delivery of the road project remains heart-warming, especially, as the road, on completion, will be of great benefit to all Nigerians who will use the road or the products from the Bonny Island.

The Rivers Patriots further observed that, it was to the credit of the chief executive of Rivers State that the flag-off of the long-awaited Bodo-Bonny Road was done during his time as governor, just as they described the road as a very strategic national asset linking the ancient Island of Bonny, with her enormous economic potentials, to other communities in the state.

Meanwhile, the Chairman, Caretaker Committee of Andoni Local Government Council, Isaiah Gogo-Ogute has decried the marginalization Of Andoni ethnic nationality by the APC-led Federal Government in the naming and flagged-off of the Bodo-Bonny Road project.

In a statement signed by his Press Secretary, James Mgboineme-Owaji, the chairman called on the Federal Government and relevant agencies to immediately correct the project name to bear Bodo-Andoni-Bonny Road.

The Andoni CTC chairman emphasized that Bodo and Bonny have no common boundaries either by air, land or water, explaining that the only link between Bodo and Bonny was through Andoni.

Gogo-Ogute further argued that the deliberate denial of Andoni ethnic group of their right over their land through which the road passes amounts to undermining the place of Andoni in bringing the road to Bonny to manifest fruition.

The Andoni council boss, however, maintained that the people would strongly reject the name and may continue to protest their exclusion until justice was done by reflecting Andoni in the name.