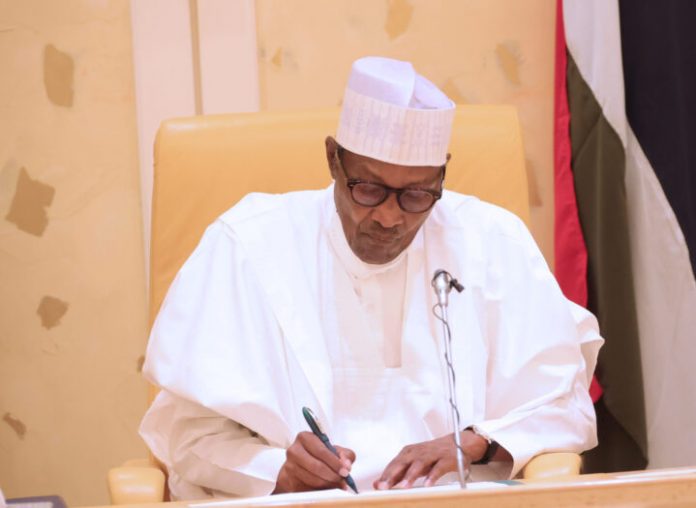 President Muhammadu Buhari has said the intent of the deadly Boko Haram group was to destroy Nigeria.

He also said his administration, will, in the few months to the end of its tenure, consolidate on the security and economic gains recorded ahead of May 29, 2023 handing over.

Special Adviser to the President on Media and Publicity Femi Adesina, in a statement Wednesday,   quoted President  Buhari as saying this while playing host to the leadership of  Catholic Bishops’ Conference of Nigeria (CBCN) at the State House Abuja.

At the meeting, the clerics told the president to get rid of the “murderous criminals” before he exits as Nigeria’s president.

Receiving the Bishops, Buhari said: “I just came back from Adamawa and Yobe States. During the visit to both states, I listened carefully to what the people and officials had to say. And they all said the situation had improved since 2015, especially in Borno State.

“Boko Haram was just fraudulent and a plot to destroy Nigeria. You can’t say people should not learn; the people need to grow intellectually.”

He told his audience that the government was now focused on rebuilding infrastructure and re-orientation on education in the northeast.

The president said: “I am very grateful for your visit to the Presidential Villa, and I agree with you on some of the observations you have made. The question of insecurity is most important to us because unless a country or institution is at peace, it will be difficult to manage.

“I just came back from Adamawa and Yobe States. During the visit to both states, I listened carefully to what the people and officials had to say. And they all said the situation had improved since 2015, especially in Borno State.

“Boko Haram was just fraudulent and a plot to destroy Nigeria. You can’t say people should not learn; the people need to grow intellectually.”

He also assured the visiting clerics that the government would continue rebuilding infrastructure in parts of the country affected by terrorist attacks, just as he insisted terrorists had no control over any space in Nigeria.

On the economy, President Buhari said creditors had full confidence in Nigeria, with the capacity to utilise resources and repay loans before the approvals were granted.

He said: “We are credible, that’s why the countries and institutions agreed to support our development with the loans.”

The president further lamented that the destruction of oil facilities slowed revenue generation, and the government would be harder on saboteurs.

He said some of the challenges faced in the past, which include coups and counter-coups, and civil war, had prepared Nigeria for survival.

“If you look at the economy, we are trying hard to rely more on ourselves. Nigerians rely more on agriculture for livelihood, and we are putting in our best to enable more people, and diversify. We thank God that Nigeria is still one, we should not forget that more than a million died for the nation to survive,” he said.

Earlier, leader of the delegation and President CBCN Lucius Ugorji commended the president for reforms in the electoral system, making it more stable and fairer, particularly the signing of the Electoral Bill into law.

But in a version of  what transpired during the visit, as made available to newsmen in Ado-Ekiti, Ekiti state, by Catholic Bishop of Ekiti Most Rev. Felix Femi Ajakaye, the CBCN told the president that: “Our Church personnel have been frequent victims in terms of kidnapping or outright murder. The Owo-Ondo State Catholic Church massacre on Pentecost Sunday, June 5th, 2022, is still very fresh in our hearts.

“In your capacity as our Commander-in-Chief, we urge you to make sure that our nation is effectively rid of these murderous criminals. We assure you of our prayers that the Almighty and Merciful God will bless you with what it takes to achieve this urgent objective.

“Rather, the main crux of our message to you today is one of fervent appeal and strong encouragement. Your tenure of two terms as President, Commander-in-Chief of Nigeria, is drawing to an end. But we believe that a lot can be done to turn things around for the better in the about four months left of your presidency before you step down in May 2023,” the clerics stated.

They said despite the frequent claims of government that it is “on top of the situation” as regards the state of our nation, the daily experience of the Nigerians masses had seen more decline than improvement.

“Our nation’s economy has been put under serious stress by both internal and external negative forces, which has had serious adverse effect on the lives and livelihood of the average Nigerians.

“This has been further worsened by the consequences of the growing foreign debt burden, which is even mortgaging our future and that of generation after us.”

On the forthcoming general elections, they said:  “It is the hope of most Nigerians that the forthcoming 2023 election will be a watershed in the political history of Nigeria.  Let our hopes not be dashed.”

“Please do not relent in making sure that INEC and other relevant agencies of government carry out their serious duties to conduct peaceful, free, fair, and credible elections,” Ugorji added.

The clerics hoped that, with better political and economic management, Nigerians have both the resourcefulness and spirit of hard work to turn things around.

“In particular, the many loopholes and leakages of endemic corruption still need to be sincerely and adequately addressed, if our economy is to recover,” they said.